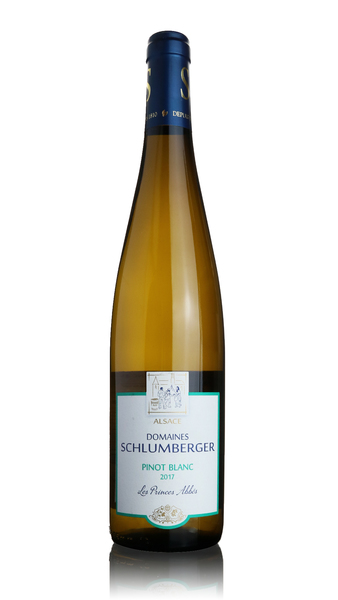 In a nutshell:
A crisp, dry Alsatian white from Eastern France with good weight.

The lowdown:
P inot Blanc from this area of France is sometimes a bit overlooked but, as demonstrated here, in the hands of a good estate they bear comparison with the more prestigious Alsatian varieties. The pale golden colour hints at the citrus and peachy notes. It has an excellent balance of acidity and body leaing to a pleasantly dry finish.

When to drink:
A very good partner to charcuterie, seafood and salads.

In 1810, the founder, Nicolas Schlumberger, after establishing a textile machinery factory in the Alsatian town of Guebwiller in Eastern France also bought about 20 hectares of vines in the surrounding area. In doing so, he laid the foundations of Domaines Schlumberger.

Three generations later, Ernest Schlumberger assumed control of the estate which, by then, was deeply affected by the phylloxera louse that struck widely early twentieth century. Most Guebwiller vineyards, as a result had been abandoned by their owners. Shrewdly, Ernest Schumberger spotted an opportunity and bought as many plots of land as he could and replanted vines. He then arranged the whole vineyard in terraces and introduced horizontal vine planting. It was during this period that they grew to be one of Alsace's largest domaines.

Since the arrival of Eric Beydon-Schlumberger in 1971 who fully involved himself in the company and replanted many of the ageing vineyards and brought modern practices to the domain it has gained the international reputation it now enjoys.