In a nutshell:
A smooth and structured biodynamic white from the Alsace in eastern France.

The lowdown:
The venerable estate of Jean-Baptiste Adam converted to biodynamics in the early 2000s and they've since become masters of the art in what is one of the driest wine producing areas of France. This cuvée is made from fifty year old vines and just what concentration of flavours can be achieved by the sometimes underrated Pinot Auxerrois. This super example has loads of primary citrus and stone fruit which complement the honeyed flavours emerging during the wine's maturation. The palate has a warm and welcoming mouthfeel making it altogether very balanced and harmonius before signing off with a fresh and fruity finish.

When to drink:
This less common variety is certainly a very rewarding wine and lends itself well to things like pork, asian cuisine and blue cheese. 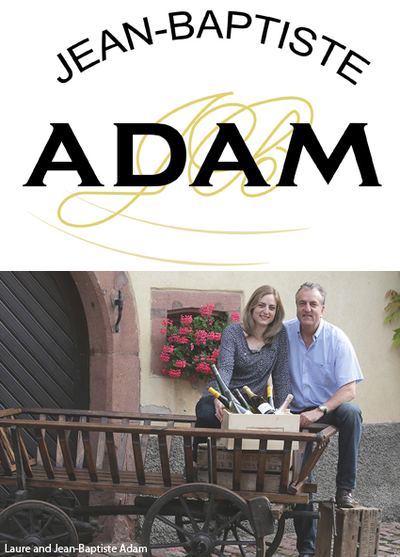 Jean-Baptiste Adam is one of the oldest estates in Alsace and in 2014 they celebrated the 400th anniversary of the family growing grapes and making wine in the Haut-Rhin village of Ammerschwir which is where they are still based. Jean-Baptiste Adam, head of the estate since 1990 is the 14th generation of the family to be in charge and he is now assisted by the next in the shape of his daughter Laure.

They have 19 hectares of vines including two Grand Cru sites, Wineck-Schlossberg and Kaefferkopf, which have all been cultivated on a biodynamic basis since 2004 meaning that no artificial chemicals of any kind are used on their vines. In the winery they adopt a similar approach and are determinedly non-interventionist, favouring wild fermentations and minimal filtration among other things. As a result of all this the wines they produce can be fairly described as wonderfully expressive, clean and complex.