In a nutshell:
Generous, juicy and easy drinking, this is an excellent Spanish all rounder from Aragon in the north of the country.

The lowdown:
The wine region of Campo de Borja, in central northern Spain is sometimes referred to as the Empire of Garnacha becasue it's by far the main grape of the area. And for decades Bodegas Borsao, the leading cooperative here, have been making ripe and appealing wines, such as this, from the variety. Juicy brambly fruit and fresh redcurrants dominate this generous easy drinking wine while cherry and strawberry flavours give way to soft tannins, good acidity and hint of spiciness to make an extremely approachable and versatile wine.

When to drink:
Very versatile and easily enjoyable it's great by itself and goes well with all sorts of hearty dishes. Slow cooked belly pork is an example of a particulary good pairing. 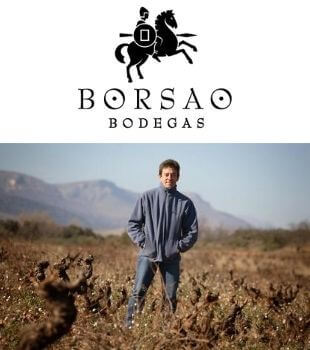 The winery was established as a co-operative in 1959. In 2001 it joined with two other progressive, co-operative, cellars in the Campo de Borja region to become the Bodegas Borsao that we know today. The region itself sits in the northern province of Aragon somewhat to the south east of Rioja.

Grapes are sourced from over 375 member growers covering 2,400 hectares - nearly a third of the region's total. Vineyards lie in the undulating foothills of the Moncayo mountain, ranging from around 350m to 800m above sea level. At lower altitudes vines are younger and may require some irrigation, but higher up the slopes the vines are older, unirrigated bush vines.

The climate is rather severe and arid, with hot dry days, and cool nights - which allow optimium acidity levels to be maintained within the grapes. Garnacha thrives in these conditions and represents 65% of total production. The Cierzo wind from the Moncayo sweeps across the foothills of the mountain. This cold, dry wind reduces humidity levels and allows grapes to be picked a couple of weeks later in the harvest, at full maturity.

Borsao has access to a large number of vineyard plots at different altitudes, and hence to a wide selection of fantastic quality grapes. They are recognised for their entry level varietals - as outstanding examples of easy-to-drink inexpensive wines - as they are for their premium wines, in particular the iconic, multi award winning Tres Picos.