A ripe and mature Armenian red made with one of the country's indigenous varieties.

Armenia, which sits just east of Turkey among the Caucasian mountains is, along with its neighbours, among the oldest wine producing countries in the world. Karmrahyut is one of their native varieties, of which they're justifiably proud, and it produces deeply coloured wines with plenty of body and flavour. Here it's been made in an unoaked style to highlight its ripe red fruit character and with a generous time spent on its lees during maturation contributing to the creamy texture. On the nose it has quite intense red fruit aromas accompanied by a touch of spice while on the palate it's quite powerful with an excellent balance between firm tannins and crisp minerality. On the lingering finish it rounds off with a touch of honey and herbiness.

Something from off the beaten track that's well worth seeking out; it'll go well with grilled, or roasted lamb, spicy stews, or mature cheeses. 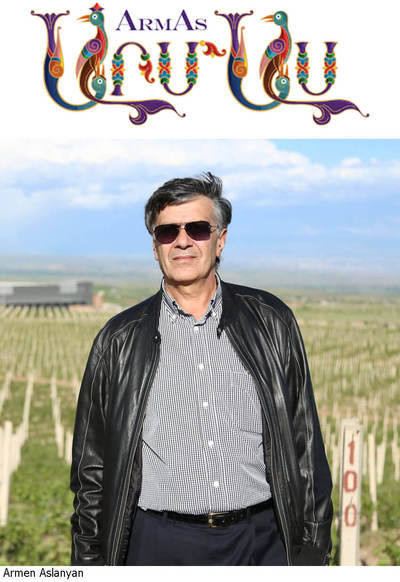 The Transcaucasian region, in which the small country of Armenia sits, is one of the world's oldest viticultural regions with records of winemaking going back into antiquity. Following the country's emergence from the Soviet era in the 1990s the conditions were right for independently owned wine production to re-commence and from around 2005 new and former vineyards started to be planted and slowly but surely the country's wine industry started to re-establish.

ArmAs estate is one such producer and was established in 2007 by Armen Aslanyan who set about re-planting former vineyards in the Aragatsotn province, in the shadow of Mount Ararat, at altitudes of between 700 and 1,900 metres above sea level. The estate covers an area of 180 hectares and is given over to indigenous Caucasasian varieties. The winemaker is Italian Emilio Del Medico who has fully embraced the concept of producing a distinctively Armenian style with no small degree of success.