In a nutshell:
Pale and lemony Belgian Trappist Tripel from the Westmalle Monastery Brewery near Antwerp.

The lowdown:
Westmalle Tripel which undegoes secondary fermentation in bottle has a lovely golden-yellow colour and amazingly fruity aromas of ripe banana with a subtle hint of hops. Wonderfully herby and with lemon-like zesty flavours it's got an awful lot going on as it leads gradually to a lingering and refreshingly dry finish. 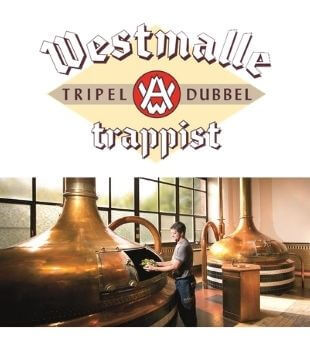 Westmalle belongs to just a handful of present day Belgian Trappist breweries. Originating in the Westmalle Abbey and first brewed by abbot Martinus Dom in 1836, Westmalle are largely credited with brewing the first strong golden ale to use the term Tripel. Just three beers are produced at Westmalle: Dubbel at 7%abv and Tripel at 9.5%. Their third ale, Extra is a medium strength beer with very limited availability said to be drunk by the monks during the working day. It has been suggested that the breweries lineup of just three beers is a direct reference to the Holy Trinity.