A great value, juicy and fruity red from Northern Macedonia.

Made with the native Kratosija grape (pronounced Krat o Sha) believed to be closely related to Zinfandel. The wine has bright aromas of redcurrants, cherry and red berries leading onto a medium-bodied and soft palate. Well worth trying.

It's a lovely versatile red and one that will show its best served slightly chilled. 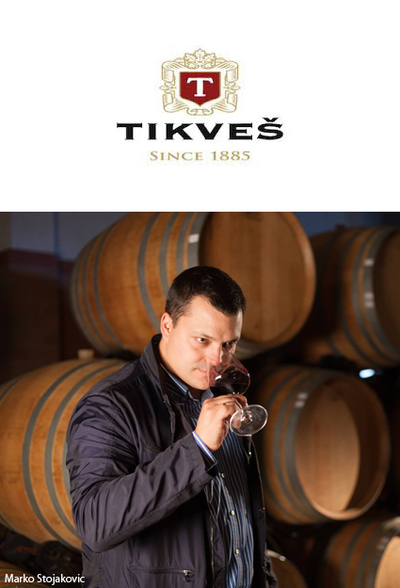 The Tikves Winery is based in the town of Kavadartsi in the the Balkan country of Northern Macedonia. First established back in 1885 they've been producing wines ever since despite being in a part of the world that has seen many political upheavals during that time.

After 1945, when in Tito's Yugoslavia the winery was nationalised and targets were based on quantity rather quality. However since the 1990s things have changed somewhat. While it remains one of the largest wineries in the Balkan region the current owners, the M6 investment group who took over in 2003, have changed things around completely. In 2010 a French wine consultant, Philippe Cambie, from the Rhône Valley, was brought in and alongside Marko Stojakovic, head winemaker, who grew up and studied in France before returing to the Balkans they head up the team who craft their range of quite impressive wines.

Their focus is very much on indigenous varieties which, while often being tough for western european tongues to pronounce, are easy on the tongue when it comes to the drinking and have certainly begun to make an impact. For example their Barovo 2015 single vineyard red picked up a platinum medal at the Decanter World Wines Awards 2018. Northern Macedonia is somewhat off the beaten track, but at Tikves the wines being made easily stand comparison with many of the better known wine producing nations.