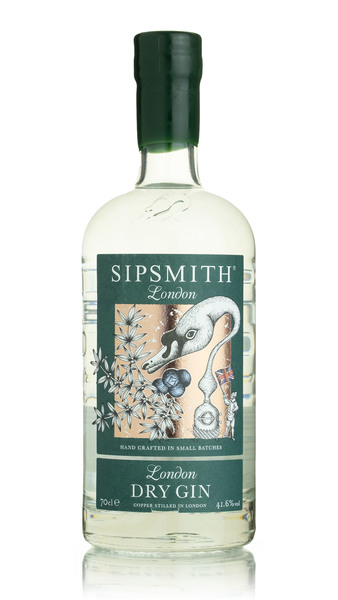 In a nutshell:
The quintessential expression of a classic, traditional London Dry Gin.

The lowdown:
Sipsmith's flagship gin is led, quite nautrally, by dry juniper notes with hints of lemon tart and orange marmalade following. The deliciously floral aromas also have a characteristic citrus touch.

It's bold, complex and aromatic  smooth enough for a Martini, but rich and balanced, perfect for a G&T.

Sipsmith's story began in 2009, in a tiny workshop in Hammersmith, London. Two childhood friends, Fairfax Hall and Sam Galsworthy, had an unwavering belief in things well made - the way they used to be, the way they should be. So they set up London's first traditional copper distillery since 1820 - quite a few have since followed. Their mission was simple: to bring London Dry Gin of truly uncompromising quality and character, back to the city where it first earned its name. Every bottle of Sipsmith is hand-crafted in genuinely small batches. Every drop of every batch is lovingly laboured over by hand, by dedicated Distillers. No regimented timings, no automatic cuts, just a craftsman's flair and a passion for gin well made. They believe this is the only way to craft spirits of this quality.

the current distillery is situated in a residential street in Chiswick close to where it all started. In 2016 they were bought by the Beam Suntory group, but still operate on an pretty independent basis and true to their craft distilling beliefs.