In a nutshell:
Crisp and clean Portuguese Pilsner which is probably the country's best known and most popular beer.

The lowdown:
Easily recognized by anyone who's ever been on holidy on Portugal this pale golden pilsner has a crisp dry character and pleasant refreshing bitterness and brings back memories of the Algarve. 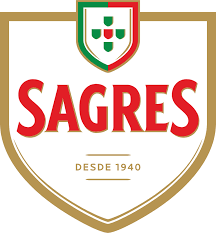 From their headquarters just noth of Lisbon on the river Tagus Sociedade Central de Cervejas, or SCC as they're more usually called, are best known for their best selling brand Sagres. First brewed in 1940 it's probably the most well known Portuguese beer brand across the world. Since 2008 the company has been a subsidiary of the giant Dutch brewer Heineken.