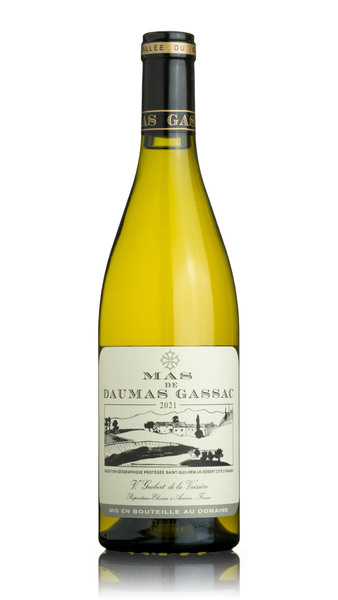 In a nutshell:
An intense and expressive white and one of the benchmark wines of the Languedoc.

The lowdown:
Made by the iconic Gassac estate under the expert guidance of the Guibert family, this is an elegant, subtle, fresh and rounded blend of mainly Viognier, Chardonnay, Petit Manseng and Chenin Blanc together with small contributions from a whole host of other, rarely seen varieties. It's hand harvested and no oak is used in the winemaking which is aimed to retain the delicacy and freshness of the flavours and makes it a wine that's perfect for drinking young when the fresh minerality and complex fruitiness is at its prime. However it's also capable of ageing gracefully and if left for a few years it develops a whole new layer of honeyed notes.

When to drink:
Perfectly delicious on its own as an aperitif, or it makes a good partner to simply grilled fish, or seafood, especially oysters. 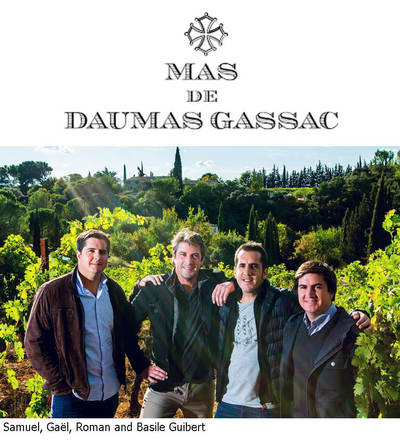 The story of Mas de Daumas Gassac is one of vision, enterprise, passion and pride. When the Véronique and Aimé Guibert first purchased their farm (the mas) in the charming Gassac valley they little realised that they had a particular micro-climate which would give them the potential to make great wines.

A visiting professor from Bordeaux, one Henri Enjalbert, identified a particular red soil that was common to certain great estates in the Médoc and Grand Cru Burgundies. Under the thick garrigue scrub and shrubs covering the Arboussas hills, he found some 40 hectares of perfectly drained soil, poor in humus and vegetable matter, rich in mineral oxide (iron, copper, gold etc). Formed from deposits carried in by the winds during the Riss, Mindel and Guntz glacial periods (ranging from 180,000 - 400,000 years ago) the terroir provides the three elements necessary for a potential Grand Cru: deep soil ensuring the vines' roots delve deep to seek nourishment; perfectly drained soil ensuring vines' roots are unaffected by humidity; poor soil meaning that vines have to struggle to survive, an effort which creates exceptionally fine aromas. Rock, scrub and tree clearing began in 1971 and the first vines, principally Cabernet Sauvignon, were planted on the 1.6ha plot.

The cellars have been created in the foundations of a Gallo-Roman mill; they now house 400 Merrain oak Bordeaux barrels; one in seven is replaced each year. There are two cold water springs under the cellar's floor, nature's own air conditioning system, which slows the alcohol fermentation down to between 8 - 10 days. This slow process means the complex flavours have time to develop, something that doesn't happen with modern high-tech fermentation. You cannot talk about Gassac without mentioned Emile Peynaud who effectively came out of retirement in 1978 to mentor the Guiberts in their early wine-making endeavours.

With the passing of founder Aimé Guibert, at the age of 91 in 2016, the running of the estate has passed to his sons Samuel, Gaël, Roman and Basile. They've been working at the mas since the early 2000s and, as a team, look set to continue the to build on the fine reputation their father has established.