A generous, vibrant, youthful red from Puglia in the south of Italy.

This part of Italy is home to the Negroamaro and the go ahead co-operative of San Marzano are one of the best producers. Vinified and aged in stainless steel the aim here is all about featuring fruit's juiciness and purity. The name 'Negroamaro' might imply something dark and tannic but this is anything but. It's wonderfully soft and silky and packed with juicy red fruit flavours, touches of fresh herbs and a hint of earthy spice.

Expressive and well balanced it's a good accompaniment to grilled red meat, or game. 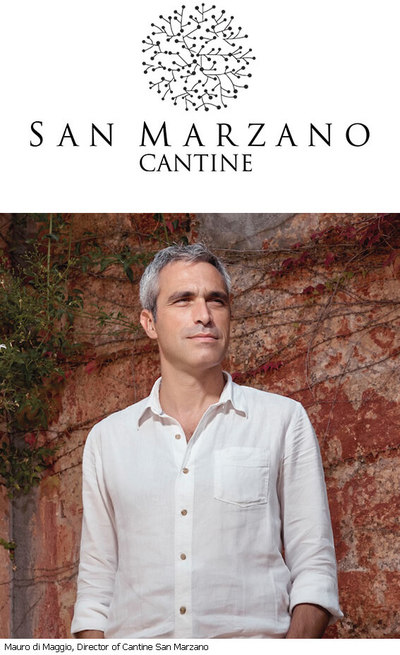 In 1962, 19 vine growers from San Marzano, deep in the Puglian heel of Italy, whose families had farmed the land for generations, combined their efforts to establish 'Cantine San Marzano'. Through the decades this co-operative has grown significantly and can now boast over 1,200 members and has a reputation for quality that has earned international renown. They are based just east of the town of Taranto in the region of Salento.

Primitivo and Negroamaro, Puglia's best known grape varieties, form the backbone of production, but using modern and technologically advanced vinification techniques they also produce many elegant wines from a range of other varietis as well. The fusion of time honoured tradition, passion and contemporary techniques, enables this winery to produce wines with distinctive varietal and regional characteristics while reflecting the local terroir. A well earned recognition of their efforts came in 2017 when they were named 'European Producer of the Year' at the Sommelier Wine Awards.

The Cantine's director Mauro di Maggio is a native of this part of the world and grew up with a connection to the winery before going to work there in 2003. As a result he knows his members well and his close working relationships with them has helped keep the quality of fruit supplied to the winery at high levels.