In a nutshell:
Classic Belgian Oude Gueuze from Brouwerij Boon near Brussels.

The lowdown:
Oude Gueze beers are made by blending together lambic beers of differing ages. Here the guys at Brouwerij Boon reckon they've created the perfect marriage with their blend. It's medium bodied with a malty oaky-tart feel where the soft, mildly sour berry flavours merge with oak aromas obtained from the long months the beer has spent maturing in barrel. Bottle conditioned, unfiltered and unpasteurized you can store it for up to twenty years if you wanted to. 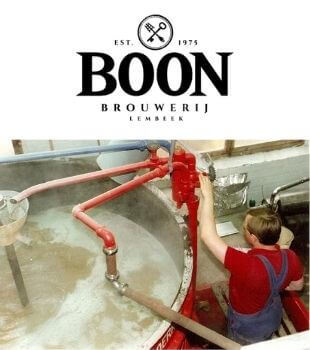 Oude Geuze is a beer with a long history. This Lambic- based beer used to be made in and around Brussels by hundreds of large and small breweries.

By the 1970s, many of these breweries and distilleries had become obsolete. They mainly worked artisanally with primitive installations that required a lot of manual labour.

As a young, 21-year-old, Frank Boon, inspired by this beer, started as Geuzesteker intending to take over the last Geuzesteker in Lembeek from René De Vits, which had no successors.

The takeover was completed in 1978. In addition to a building covered with layers of dust and cobwebs, the acquisition also provided Frank with a small arsenal of oak lambic barrels.

To make production somewhat profitable, the capacity was increased. Frank bought better machines for the bottling plant and placed iron brackets on top of the bottle corks to avoid bursting bottles.

However, the geuzestekerij soon became too small. There was no room for the construction of a brewing hall. A new location was found, ideally located in Lembeek on a large site with many possibilities. This made planning the construction of your own brewing hall possible. Frank himself brewed the first test brew on September 6, 1990. In October 1990, the first lambic brew was made. So there was finally a lambic brewery in Lembeek again.