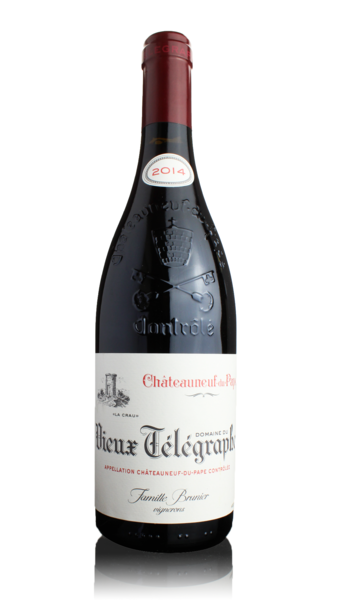 In a nutshell:
A polished and vibrant example of this classic southern Rhône red from this well known estate.

The lowdown:
Their vineyards are located on the prestigious stony Plateau de la Crau, and the grapes are hand-picked and aged in large French oak vats. Vieux Telegraphe isn't one of the hefty Châteauneufs, but it still packs plenty of richness up front which is followed up by a pleasant herbal edge.

When to drink:
As always it's very well balanced and elegant and would partner well with game, or pork dishes.

Henri Brunier founded what was to become possibly the best regarded of Châteauneuf-du-Pape estates back in 1891, in the village of Bédarrides,north east of Avignon, which known occupies the southeastern portion of the appellation area. In the same year he gave his son, Hippolyte, some plots of land on La Crau, a place in those days considered practically unfit for cultivation due to the high density of pebbles.

The latter planted his first vine stocks on this commanding plateau, where grapes had first been grown in the 14th century and where, in 1821, Claude Chappe, inventor of the optical telegraph, built one of his signal towers. Hippolyte's son, Jules, extended the estate to 42 acres and named the vineyards 'Vieux Télégraphe'.

At the end of the Second World War, Henri, the fourth generation of the family, had the formidable task of reviving the estate and shaping its destiny. Not content with further enlarging the Domaine, he gave this classic Châteauneuf-du-Pape wine the character for which it has become famous and establishing the 'Vieux Télégraphe' style.

In the early 1980s his two sons, Frédéric and Daniel, took over the reins and they now farm 247 acres in the Châteauneuf-du-Pape AOC area, and 49,5 acres of IGP Vaucluse and AOC Ventoux vines. In 1986 Domaine la Roquète was added ti their stable of followed, in 1998, by Domaine Les Pallières which was acquired in partnership with family friend Kermit Lynch.

After more than 125 years, the Domaine and its associated vineyards, guided by the fifth and the sixth generations of vignerons, have kept all of its initial philosophy very much alive and are flagbearers for the wine of Chàteauneif-du-Pape.

Magnum
Out of Stock