In a nutshell:
An elegant, rich, single malt Irish Whiskey with a real depth of flavour matured in bourbon and sherry casks

The lowdown:
A single malt Irish Whiskey with an exceptionally smooth finish. The 10 years of maturation is done mainly in bourbon seasoned barrels which lends it the distinctive Bushmill's light fruity aroma together with a melted chocolate and honey character that sits nicely on the tongue and gives a pleasant, dry finish. Great to sip neat over ice. 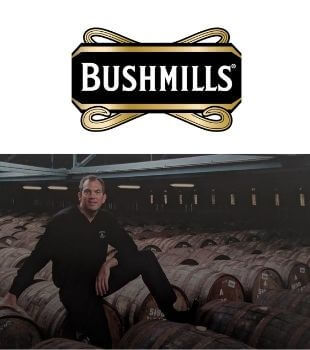 Bushmills is home to the world's oldest licensed whiskey distillery. Official records stretch back to 1608 when the area was granted its license to distil. Over 400 years later, whiskey is still being made in Bushmills, thanks to experience and craft passed down from generation to generation. Bushmills is more than just a whiskey. It's a village where family, friends and neighbours work side by side at the distillery.

In the 1850s, the Crown imposed a tax on those distilling in Ireland through a tax on barley. Even then, malted barley was known throughout the world to make the finest whiskey, known as "pure malt" whiskey. When only malted barley is used in distillation and made at a single distillery, you have the very definition of "single malt" whiskey. That tax, however, forever changed Irish whiskey, as almost every Irish whiskey distillery began substituting corn or other inferior grains for barley.