In a nutshell:
A crisp and easygoing South African white blend based on Sauvignon Blanc.

The lowdown:
Buitenverwachting are specialists in Sauvignon Blanc in what is a cooler climate part of the Constantia wine region. However in this blend they add in a little Chenin Blanc and Semillon which gives an extra dimension to this delicious white. Crisp and medium-bodied it has the gooseberry and tropical characteristics of a good sauvignon Blanc, but there are also some ripe peachy flavours, a few herbal notes as well which adds more layers of interest on the palate. It has a warm, soft feel in the mouth, but the acidity is nicely fresh and keeps things held together very well right through to the finish.

When to drink:
A very versatile choice which is delicious by itself and also a good partner to most fish and shellfish recipes. 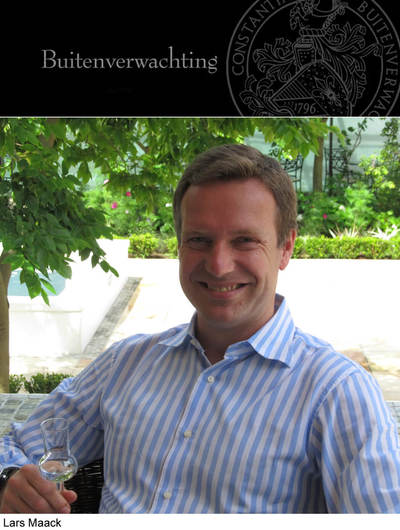 Wine growing at the site which is now Buitenverwachting goes back to the early days of South Africa's history. The first Dutch governor of the colony, Simon van der Stel, planted vines here in 1685 on what was originally the Constantia Estate. Over the years it was subdivided and now forms five wineries of which Buitenverwachting is one.

The most recent chapter in the history of the Buitenverwachting estate began in 1980 when it was acquired by Richard and Christine Müller. They set about restoring the rundown farm and vineyards and have created one of the most beautiful estates in the Constantia area just to the south of Capetown and, in the process, have an built an enviable reputation for the quality of their wines.

Their first harvest was in 1985 at which time their focus was on white wines, mainly Riesling and, a little later, Sauvignon Blanc. Over time they've also added substantial plantings of varieties such as Cabernet Sauvignon and Merlot which have met with considerable success. The Sauvignon Blancs are a reference point for that famous Europe-meets-New World style, and the reds, from the Bordeaux varieties, also show a telling combination of purity and ripeness. Lars Maack, son of Richard and Christine, is largely responsible for running the estate these days. Growing up on the estate it has become, very much, the focus of his life and it's now where he lives with his wife as they bring up their own fanily who may well take on the reins in their turn. The name Buitenverwachting means 'beyond expectation' and is a description that can often be applied to their wines.