In a nutshell:
A bright clear German wheatbeer from the Weihenstephan brewery in northern Bavaria.

The lowdown:
Filtered to make it crystal clear in the glass this has all classic weissbier flavours and aromas of banana and clove plus a touch of citrus in there as well. On the tongue there's a bit of coriander, pepper and a sweet malty underbelly to add to the mix. Nicely crisp and refreshing with a satisfyingly tasty finish. 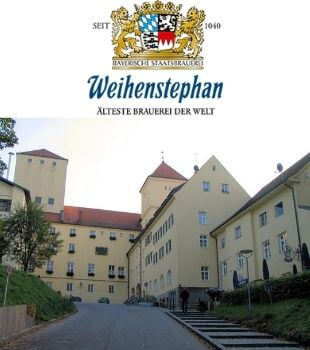 Weihenstephan is the Bavarian state brewery with a bold claim as the world's oldest brew house.

Based in in the town of Freising, a few kilometres north of Munich, the current brewery is situated on the site of the former Weihenstephan Abbey which is thought to have been brewing since 1040. As a 'state brewery' it dates back to the early 19th century following the dissolution of the Abbey. The brewery produces a full range of typical German beers from Pilsner to Dunkel but our favourite remains their cloudy wheat beer.