In a nutshell:
A luscious, rich and tropical South African dessert wine from the Stellenbosch region.

The lowdown:
Vergelegen's Straw wine isn't made every year and even then it's only in small quantities. The estate rates the 2015 as one of the best they've produced of which less than 8,500 half bottles were made. It's a blend of 50% each of Sauvignon Blanc and Semillon. To concentrate the sugar levels the grapes were either left to hang on the vines or dried on wooden pallets and were then fermented on their skins and transferred to oak barrels part way through fermentation. The result is a wine where ripe, tropical fruit abounds on the nose and where the marvellous acidity and freshness gives it a real lift on the palate.

When to drink:
Best served chilled to around 8-10°C and it's great with light, creamy desserts. 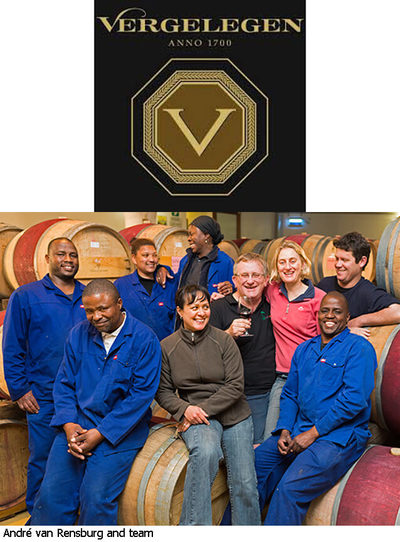 Vergelegen is one of the oldest estates in South Africa's Stellenbosch region. It is, undoubtedly, one of the country's premier wine producers and its origins date back to 1700 when an early governor of the Cape, Adriaan ven der Stel acquired a stretch of wilderness and converted it to a flourishing farm. Through the intervening years it's had a number of owners each of whom has left an imprint in the estate. However the modern era for Vergelegen really started in the late 1908s after its acquisition by the global mining group Anglo American.

They invested millions in surveying the land and extensive planting of new vineyards in the best sites and in 1992 they opened a truly impressive part sunken four level winery was opened which, using gravity, minimises the use of machinery. The head winemaker is André van Rensburg, a towering firgure in South Africa's wine industry, who has been at the helm for over fifteen years and has been instrumental in putting Vergelegen at the forefront. While probably best known for his Bordeaux blends it's fair to say all the wines that he produces are of impeccable quality. This is an instance where the financial strength of a large conglomerate and the skill of a brilliant winemaker has had yielded wonderful results.