In a nutshell:
A South Australian Old Vine Shiraz with good aging potential.

The lowdown:
The product of fruit from 50 year old Eden Valley vines on precious low yielding sites and meticulous winemaking. All the fruit is handpicked and fermented in small open topped vessels with maturation being in mainly new French Osk barrels. The aromas are of red berries and blackcurrants with dusty dried spice hints. While on the palate the fruit flavours are generous and concentrated.

When to drink:
This is a superlative South Australian red which is built to last and will be great drinking right through the 2020s. 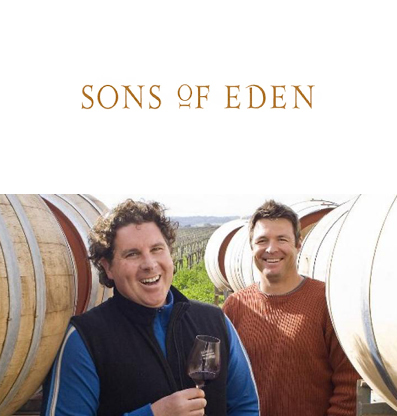 Sons of Eden, based in the heart of South Australia's Eden Valley north east of Adelaide has a simple philosophy; to produce wines with flavour and personality from vineyards of unique character within the world class Barossa region.

Sons of Eden takes its name from the two partners, Winemaker Corey Ryan and Viticulturist Simon Cowham, who both learned and refined their trades in the vineyards and cellars of Eden Valley.

Sons of Eden specialises in varieties that the Barossa produces to the highest standard. Varieties such as Shiraz, Grenache and Mourvedre from the Barossa Valley and Riesling from the Eden Valley.

Controlling the management and operation of the vineyards as well as implementing a blend of traditional and modern winemaking approaches has meant Sons of Eden is able to consistently craft wines of great quality.