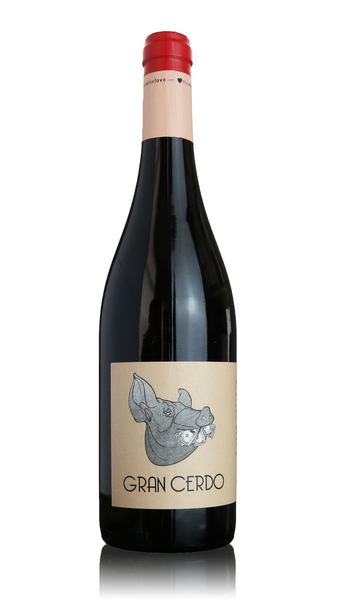 In a nutshell:
Unfiltered, unfined and very expressive red made with minimal sulphur.

The lowdown:
Winemaker Gonzalo Gonzalo grew up amongst the vineyards that his family owned. When his father became seriously ill as a result of exposure to the chemicals that were regarded as the panacea for all vineyard problems in the 1970's, he decided to work biodynamically. This wine is made from Tempranillo grown in Rioja Alta near the Ebro River. With whole bunch fermentation, this is about pure expression of fruit. Cherry red in colour, primary notes of strawberries, raspberries, cherries and violets and clean mineral tones from the granite soil. Unfiltered, unfined, unoaked and minimal sulphur.

When to drink:
Oh, and read the label, Gran Cerdo means Big Pig and Orgullo means pride. Whilst only labelled as Vina de Mesa (Table Wine) it's roots in Rioja are there to be appreciated. 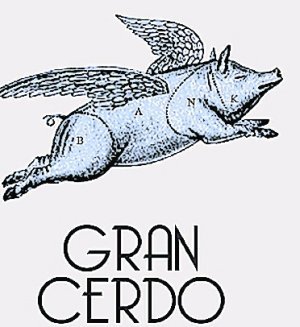 The man behind Gran Cerdo, Gonzalo Gonzalo was born in Logroño, Spain and grew up among the vineyards that his parents cultivated in Fuenmayor. After studying biology in León and oenology in the university of Rioja, he dedicated himself to travelling through France and Italy where he met small vine-growers and winemakers and discovered new varieties of grape and technologies After completing his oenologist training in an industrial winery, in 2003 he abandoned everything to give birth to Orgullo, his personal oenology project.

Fiercely protective of the terroir of his family vineyards Gonzalo rejects market driven fashions, formulae, chemical treatments and conformism. Instead he has sought out his own methods with respect for the land, his vineyards, and the traditions of his forefathers. He balances this respect with formal training in the latest enological techniques and methods.

Gonzalo was profoundly influenced in his choice of viticultural methods by the fact that his father became seriously ill from years of daily exposure to high-spec chemical fertilizers and herbicides while tending their vineyards in the 1970s, when they were regarded as the panacea for all vineyard problems. It was not clear at the time that chemicals that were perfectly safe in small doses had significant harmful effects from cumulative, long term exposure. The soil itself suffered as well, losing its vitality as witnessed in the deadening of the biodiversity in the vineyard. Wild flowers, insects, earth worms, snails and the various organisms of the vineyard ecosystem were no longer present as they were even two generations ago.

The ladybug on the label of Orgullo is a symbol of the renewed vitality of the vineyards which Gonzalo has worked long and hard to revive. The ladybug is one of the 'good' insects that prey on aphids, mites and other 'bad' insects. The chemical treatments of the recent past minimized both the 'good' and the 'bad' and in the process the vitality of the vineyards. However, this restored vigour requires plenty of vigilance and creative solutions to combat the various hazards that can befall vineyards, such as mildew, mould and other pests. For this Gonzalo keeps a close watch and has revived natural treatments and biodynamic practices used in the past to maintain healthy vineyards.