A soft and rounded sparkling wine from the French Alpine foothills of Savoy.

One of the newer French sparkling wine appellations Crémant de Savoie is made in the methode traditionelle with 85% of the grape being the local variety, Jacquère with the remainder being Chardonnay. Around 8 to 10 grammes per litre of 'liqueur de dosage' is added which gives it a nicely soft and rounded mouthfeel. In all it's chock full of bright, zingy fruit flavours giving it a real personality.

A very appealing sparkler that's not completely bone dry it makes a great aperitif and is also great with desserts. 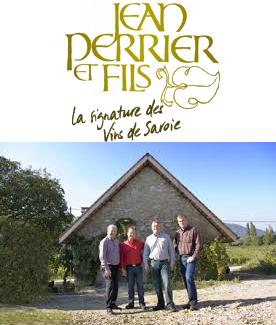 Vinegrowers since 1853, the Perrier family is firmly linked to the history of Savoy and the French Alps, producing around 135,000 hectolitres in the departments of Savoie, Haute-Savoie, Isère and Ain. Their winery is the small town of Les Marches, just south of Chambéry. The business has been a family concern since 1853 and is currently run by Gilbert Perrier and his three sons, Philippe, Christophe and Gilles.

Granted an AOC status in 1973, the vineyards have expanded over the years to approximately 69 hectares planted with Savoyard speciality varieties such as Jacquère, Abymes, Apremont and Chignin for white wines and Gamay, Chautagne, Jongieux, Mondeuse and Arbin reds. A fruit driven Méthode Traditionelle Crémant de Savoie with plenty of personality is also produced. All of the wines express the thinking of the grower, they are rough and wild at first, but open up with a warm and beautiful heart and personality.

Vines for the whites are mostly planted on clay-limestone and the reds on granite and clay-limestone on a south eastern exposure near the city of Chambéry in the heart of Savoy.

All their vines are manually harvested, the grapes undergoing gentle pneumatic pressing, and temperature controlled fermentation at around 20 degrees celsius. Most of the wines also complete malolactic fermentation to lower the acidity and avoid a secondary fermentation in the bottle.