A rich and supple Languedoc white from the Minervois from a boutique producer.

The wines of Boulevard Napoléon are made by Benjamin Darnault in the village of La Livinière. Only a few hundred cases of this are made each year and come from vines which are over 70 years old from the Le Pal vineyard near the village. Being made from Grenache Gris disqualifies it from bearing the Minervois-La Livinière appellation so it's sold as just a Vin de Pays de l'Herault. As you'd expect everything is hand harvested and after whole bunch pressing it's fermented and aged for a year in used French oak barriques before being bottled. The resulting wine is rich and supple on the palate with subtle notes of hazelnut, smoke and liquorice. Quite full bodied with a satisfyingly creamy texture, there's plenty of citrus and stone fruit intensity on the palate leading up to a finish which is fresh, long and lingering.

One of the best whites coming out of the Languedoc, think of it as standing alongside a good white Burgundy. 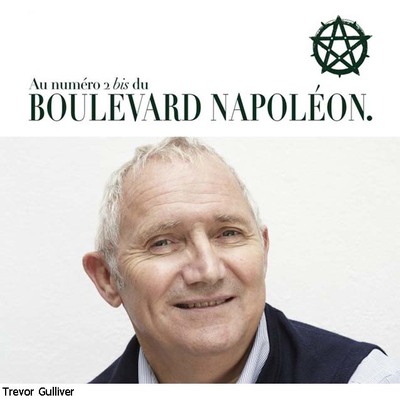 Trevor Gulliver is best known as the London restaurateur behind several successful establishments such as The Fire Station in Waterloo, Smithfield, and Bread and Wine, as well as several other food and drink related enterprises. One of these is Boulevard Napoléon, his winery situated in the village of La Livinière in the hills of the Minervois in the Languedoc, which happens to be close to his southern French holiday home.

While the scale is pretty small, as with all his projects it's a high quality operation and one in which he partnered with renowned winemaker Benjamin Darnault. All the wines come from old vineyards in the La Livinière appellation and while they're certainly among the best made here they generally only take the more generic 'Vin de Pays de l'Herault' appellation because they don't want to be constrained by the regulations otherwise imposed. The quantities of all the wines produced are always limited and each is a classic expression of what can be produced on the dry, stony slopes of this part of the south of France; they have a vibrancy and definition that marks them out from the crowd.