In a nutshell:
A powerful and deep Catalonian red from the hills of the Priorat region.

The lowdown:
Alongside Rioja, Priorat is Spain's finest region of production for quality red wines, though it produces a fraction of the volumes of the more famous counterpart. The wines are known for their vigour, concentration and richness and this example made from mainly Garnacha and smaller amounts of Cariñena and Cabernet Sauvignon is no exception. Pronounced aromas of black fruit, vanilla, clove, tar and lifted floral notes leap from the glass. There's real power and body on the palate with luscious, rich dark fruits and complex spice. Signs of maturity are starting to show with savoury notes appearing mid palate followed by lovely full, ripe tannins and hints of leather and spice on the finish.

When to drink:
Impressive stuff, this is great matched with things like shoulder of lamb, or rabbit braised with olives and herbs. 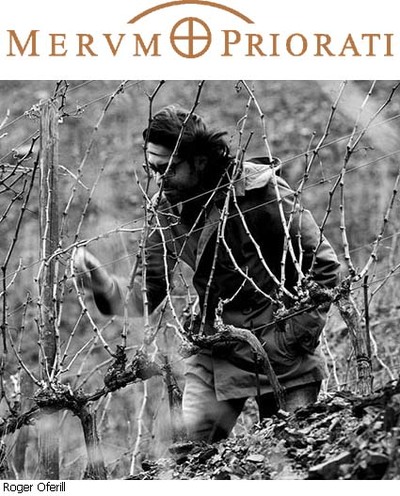 Merum Priorati is one of the most important wine estates in Priorat, founded in 2004 by two Catalan families, and located in the east of the appellation around the pretty village of Porrera in the hill north west of Tarragona. The 3 vineyard plots they have, Les Foreses, Plana Marjot and Les Escomelles cover a total of more than 100 hectares, but less than 30 are given over to vines, as this is one of the wildest, most rugged terrains, where few vines thrive and those that do produce less than 1 kg of grapes per vine (even less for the older Garnacha and Cariñena plants). As a result vineyard size here is not measured in hectares, but by numbers of vines planted, due to extreme terracing and contours on these stunning mountainsides. There isn't what you'd call soil more just a carpet of broken black slate called Licorella. 5 grape varieties manage to thrive on the estate: Garnacha, Cariñena, Syrah, Cabernet Sauvignon and Merlot.

Winemaker Roger Oferill's impeccably made but not over polished wines are truly hand-made: fermentation is in small, open top vats with long cuvasion and the wines are intense and seriously complex against a backdrop of bright and vibrant modern fruit.

Domaine of the Bee 'The Bee-Side' Grenache 2018