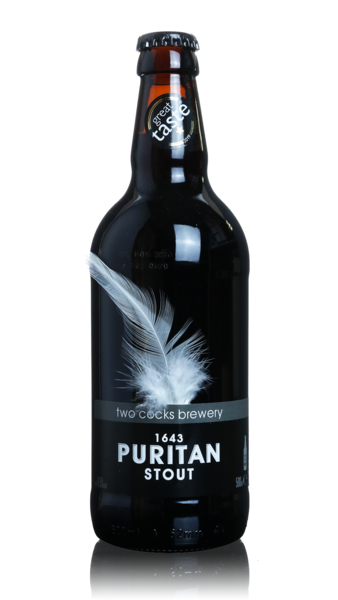 The lowdown:
Its stark black and white appearance conceals luxurious notes of caramel and chocolate and at 4.5% this is anything but austere. Cromwell would not approve.

Located on the edge of Berkshire, West of Newbury, Two Cocks Brewery was established in 2011 by Mike Butcher and Phil Palmer and featured on Grand Designs in 2013. At that time, the brewery was part of the farm which hosted the Roundhead reserves encampment during the battle of Newbury on September 20th, 1643 and it was this that provided the inspiration behind most of their beer's names.

In December 2019 the brewery was sold to Taryn and Paul Medlin who originate from South Africa and were for mnay years involves in the international telecoms business. But they've always been passionate about brewing quality beer and lager so when thechance came along to take over a brewery with such a good reputation it was something they couldn't turn down. They're stated aim is to keep to tradition rather than follow the trends and take pride in producing quality ales.