A highly drinkable, well-made, Crianza Rioja from the Torres stable.

Made at Torres' Rioja winery in the town of Labastida in the heart of the region from 100% Tempranillo grapes it's aged for 16 months in oak barrels before an extened period in bottle. It has ripe red cherry, raspberry and strawberry fruit flavours coupled with sweet spice notes and hints of smoke and vanilla.

Silky smooth with fine, juicy tannins this is a really approachable and excellent value wine. 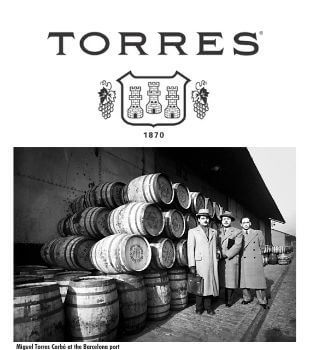 Founded in 1870, Familia Torres is widely regarded as one of the world's most innovative wineries. They are also one of Spain's leading producers of premium quality wines. They have wineries across Spain, but their heartland is Catalonia in the town of Vilafranca del Penedes not far from Barcelona.

Miguel A. Torres is widely regarded as one of Europe's leading wine visionaries. After studying oenology and viticulture in Dijon and Montpellier he was responsible for pioneering a number of significant technological advances in the field of winemaking in both Spain and Chile. Today the company is run by his son, Miguel Torres Maczassek, the General Manager of Bodegas Torres, who succeeded his father in 2012.

The winery produces a comprehensive range of different styles, all of which bear the Torres hallmark of quality. The range includes very accessible styles such as Viña Sol, which has held the position of the UK's number one branded Spanish white wine for many years, to complex, iconic wines such as Reserva Real a blend of Cabernet Sauvignon, Cabernet Franc and Merlot. Familia Torres are also known for their Super Premium and Reserva wines such as Fransola, Altos Ibericos, Celeste and Milmanda - all of which have become benchmarks in their own right.

Other wines within the range demonstrate Torres' determination to be at the forefront of innovation and winemaking development. One such one is Purgatori from the Costers del Segre appellation. Made from a limited production of Garnacha, Cariñena and Syrah grapes from the estate in L'Aranyó, this wine derives its unique character from the continental climate and extremely arid conditions of the region. Another example is Sons de Prades, a new Chardonnay varietal from the famous Milmanda vineyards (DO Conca de Barberà) which is produced in relatively small quantities and has developed a strong following.

Famila Torres' reputation for combining innovation, dynamism and a commitment to quality has put them, and Catalonia, firmly on the world map. Today they remain a wholly independent and family-owned company, which is now run by 5th generation of the family. As part of the 4th generation, Miguel A. Torres has been described as "one of Spain's most innovative and influential winemakers". As well as being one of the first exponents of stainless-steel tanks and temperature controlled fermentation, he also pioneered the planting of non-Spanish grape varieties, such as Cabernet Sauvignon, in his native Spain. During the past 30 years Familia Torres have also focused on re-discovering ancient Catalan grape varieties that existed before Phyloxera. Today close to 50 of these "forgotten" varieties have been rescued and about six of them show great potential. Indeed, two of them - Garro and Querol - are already used in the top single vineyard wine Grans Muralles.