In a nutshell:
A rich and intense Bordeaux blend from southern Tuscany by the iconic Tenuta di Trinoro winery.

The lowdown:
When Andrea Francetti founded Tenuta di Trinoro in 1991 it was in a wild part of southern Tuscany with little vineyards but with a single minded sense of purpose he created in short time one of the best estates producing Bordeuax-style blends in all of Italy. Le Cupole is the second wine of the estate first made in 1995 and has quickly gained a big reputation and loyal following. A full-bodied blend of Cabernet Franc, Merlot, Cabernet Sauvignon, and a little Petit Verdot, aged in French oak barrels for 8 months and then 11 months in cement tanks before bottling. Big, rich and bold with expressive aromas of black cherry, plum, blackcurrant, leather, smoke and spice with some herby and earthy notes. The palate is broad with rich fruits and spice, robust tannins and a long finish.

When to drink:
Drinking well now and will keep through to 2030. This is a definite big red meat or roasted vegetables wine. Perfect with a big medium-rare steak. 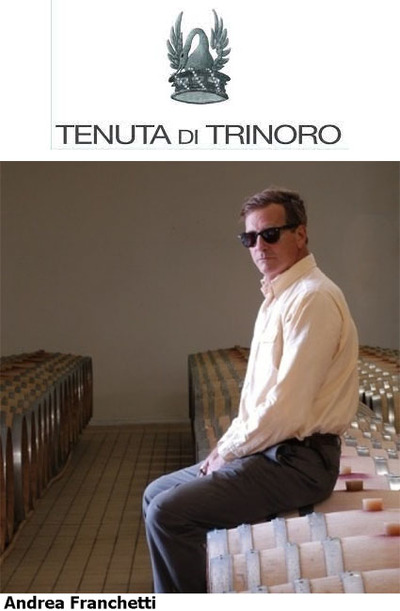 The story of Tenuta di Trinoro is that of a terroir-inspired visionary, who defied convention to follow his instinct. From his 22 hectare estate in Val dOrcia, Southern Tuscany, Andrea Franchetti now produces some of the greatest examples of Bordeaux blends to come out of Italy.

Innovation, creativity, and expression are at the core of Tenuta di Trinoro and Andrea's winemaking philosophy, much of which stems from the vision and culture of his family. From an early age, he was inspired by his uncle, the great artist Cy Twombly, as well as the great winemaking traditions of his extended family, the Rothschild's. Wine has long been Andrea's passion, and prior to winemaking he had established his own import business in the US, supplying top-quality Italian wine to New Yorks restaurant scene. But after years of traveling and working with hospitality, Franchetti decided to leave metropolitan life behind and return to Italy to embark on a career in wine production.

Tenuta di Trinoro was founded in 1991 on a trip to Val dOrcia. An area with no previous viticultural history. Struck by the dry air and blinding light, Andrea came across a rundown old farmhouse, with no road access, surrounded by woodland and it was here that he decided to establish a vineyard from scratch using the classic Bordeaux varieties, Cabernet Franc, Cabernet Sauvignon, Merlot, and Petit Verdot. The first vintage of Tenuta di Trinoro was produced in 1997 and immediately caught the eye across Italy and abroad. Today, through quality focussed, terroir-driven winemaking, Tenuta di Trinoro produce complex wines, which show power and concentration. This cult winemaker continues to push boundaries as well as his own personal standards, a seriously exciting producer, of legendary status.