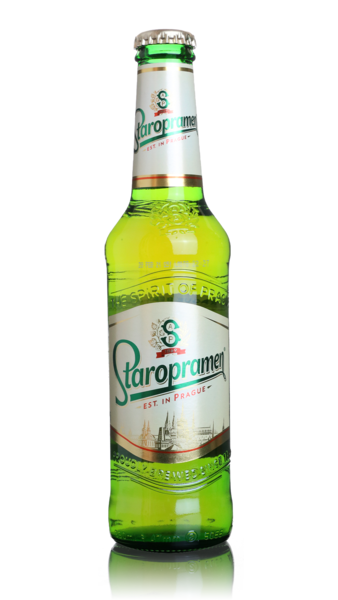 In a nutshell:
Traditional Czech Pilsner from Staropramen of Prague.

The lowdown:
This well balanced Czech Pilnser has been brewed for over 150 years using the finest ingredients including premium Czech hops. It has a fine hoppy, slightly fruity aroma and a refreshing balanced taste.

Now part of the Molson Coors brewing empire, Staropramen retains its quality mainly thanks to its brewing heritage with its roots laid down by the German Purity Law. Almost all major, and most minor, towns in the Czech Republic had a local brewery and Staropramen soon became Prague's largest when the Ostravar and Branik breweries merged with Staropramen in the 1890s. With steady growth Staropramen soon became the largest brewery in the Czech Republic until all breweries were nationalised under socialism. Recent history has seen the brewery change hands from Bass in the 1990s to Annheuser-Busch InBev in more recent years.

By The Horns West End Pils