An outstanding Sauvignon Blanc from the cooler Walker Bay region of South Africa.

Made reductively in order to maximize the fruit personality of the vintage, while maintaining the typical Southern Right balance of Old World minerality and length with hints of New World palate coverage and body. The 2017 is a wine that favours origin expressive individuality, minerality and palate complexity ahead of pure, pungent varietal aroma. A significant percentage of fruit from clay-rich soil has added an intense mid-palate structural component and addition overall complexity to this wine.

Pairs well with fresh fish dishes, or things like a goats cheese tart. 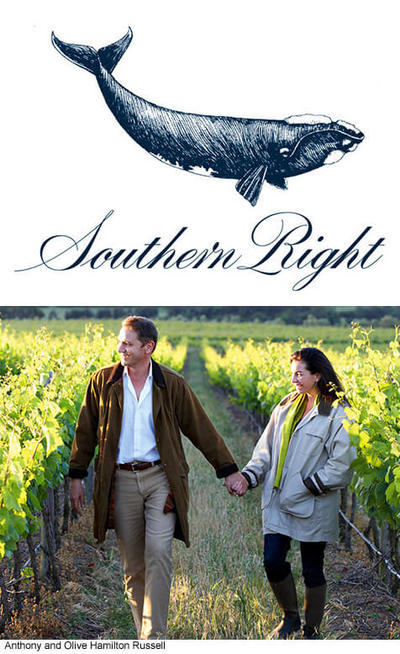 Founded by Anthony Hamilton Russell in 1994, Southern Right's aim is to produce serious, age-worthy Pinotage combining distinct South African fruit and flavour, with classic styling and refinement. Pinotage is best-suited to cooler areas such as behind the old fishing village of Hermanus where the stony, high clay content, shale-derived soils chosen for the vineyards are perfect for creating the intended classic style of the wines.

The wines are named after the rare Southern Right whales, which frequent the cool South Atlantic Walker Bay, just three kilometres from the vineyards. In August 2005, when the 448 ha farm on the western border of Hamilton Russell Vineyards became available, Anthony acquired the unique property as a permanent home for Southern Right and the Cellar was completed in time for the 2009 harvest.

Anthony is a ?rm believer in conservation and manages more than 200 hectares of pristine Cape Mountain Fynbos which forms part of the Estate's own private nature reserve. With each bottle sold, Southern Right makes a contribution to conservation in the area.