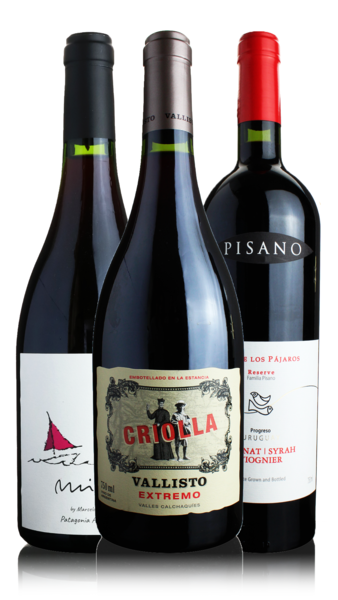 Starting off in Argentina we have a bright and aromatic organic red from Patagonia in the dry south of Argentina. Trousseau is not a widely seen variety these days. It originates in the French Jura region and is also know as Bastardo when grown in Portugal. It makes quite perfumed wines and this example from the arid pampas of Patagonia exemplifies this in this young and wonderfully bright quaffer.
Jumping over the boarder next we have a refreshing, crunchy Argentinian red from the far northern region of Salta. Vallisto are based in the northern, high altitude Salta region of Argentina and make some very interesting wines from the unique soils and climate of the area. This wine is made from the Criolla Chica grape variety which has been growing in Argentina since missionary settlers first arrived here in the 16th Century. It's known by different names in different countries and it's as 'Pais' in Chile that it's more widely known. The vineyards for this were first planted in 1898 and are at 2600m above sea level. It's all hand-picked and sorted and no oak is used in its maturation.
Moving now to the opposite side of South America, to Uruguay we've got a rich, spicy and multilayered South American red. In terms of output Uruguay is some way behind it's South American neighbours and certainly not as well known, but it's an up and coming wine producing country with good vineyard sites and some talented winemakers. The Pisano family are a long standing producer and their wines really exemplify the quality from here.

So learn and discover the 'Adventurous' wines of South America with our 3 bottle Snapshot Case.