In a nutshell:
A generous medium-to-full bodied Italian red from the Marche region along the Adriatic coast.

The lowdown:
At Azienda Agricola Vignamato they're well known for their excellent Verdicchios - the signature white wine of the area - but this excellent red is not to be overlooked. It's a blend of 80% Montepulciano and 20% Sangiovese and produces a wine with a fullish feel, smooth tannins and generous red berry fruit flavours.

When to drink:
At the price it's a really good value wine that's just perfect for a pizza night. 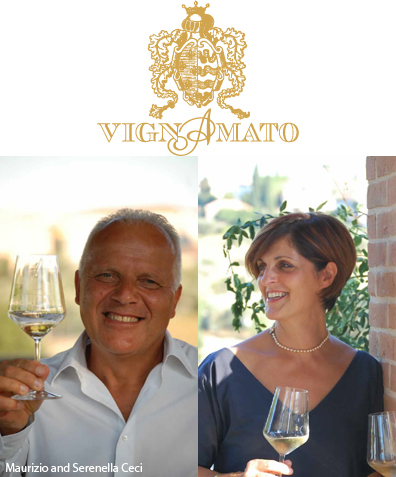 Wine production has been in the Ceci family since the 1940s, when Umberto Ceci first bought Verdicchio vineyards in the town of San Paolo di Jesi, in Italy's Marche region not far from the Adriatic. This is where current winery is still located.

In the 1950s, Umbertos son Amato and his wife increased production by acquiring new land, and began bottling their own wines and in 1992 Amatos son Maurizio, the third generation of the family in the business, and his wife Serenella invested in a modern winery, which they called Vignamato. This investment has allowed them to capture perfectly all the fresh, vibrant character of their coastal grapes. The next generation in the shape of Maurizio and Serenella's children, Alessandra, Andrea and Francesco are now helping to shape the future of the business.

In total They farm around 18 hectares of vines, most of which is planted with Verdicchio, which goes towards the area's most well known whites, and they also have a few hectares of Sangiovese and Montepulciano used for their equally impressive, if lesser known red wines.