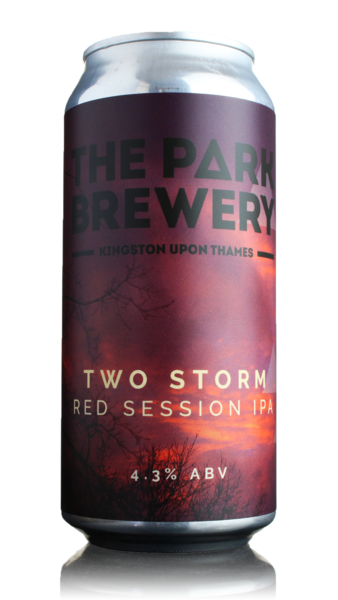 The lowdown:
Brewed just across the river from us in Kingston-Upon-Thames this ruby, red Session IPA is named after Two Storm Wood in Richmond Park. Deep amber hue in the glass with sweet fruit aromas from the dry hop of Citra and Ekuanot, piney flavours on the palate with a refreshing lingering bitterness thanks to the Columbus hop.

The Park Brewery was established by Josh and Frankie Kearns, a husband and wife team. Born from obsessive home brewing throughout 2012-2013 and after encouraging feedback from friends and local bottle shops (ourselves among them), they made the leap and invested in a small kit, found local premises and took the brewing out of the family kitchen.

Their main aim is to deliver thought provoking beer with big flavour and aroma. All of their beers are hop forward and not reliant on the malt base for flavour. Particularly with their core range, the emphasis is on extracting as much as they possibly can from the hops available they source from around the world.

The Park Brewery is situated near Richmond Park and they've used the history and landscape of the place to inspire the naming of their beers. Based in Kingston upon Thames, their location is important to them and they celebrate being local as well as resurrecting Kingston's rich brewing history.