A lovely example of one of Italy's classic white wines.

Orvieto is one of Umbria's signature whites and in Sergio Mottura's hands this example is certainly a complex and distinctive wine (don't mention that the grapes are actually grown in neighbouring Lazio). Pleasantly dry and fresh it has minerally and herby notes on the palate with light citrus and stone fruit flavours. Following is a crisp yet mellow and persistent mouthfeel.

Try with antipasta, bruschetta or spaghetti. 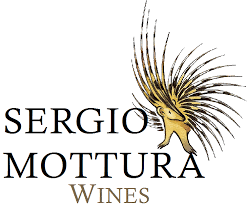 In the 1990s, once Sergio Mottura's Lazio estate turned to organic grapegrowing and ecosustainable farming practices (such as installing a photovoltaic system enabling the estate to work with zero energetic impact), it became completely overrun with a rare and protected species of porcupines. These animals are remarkably sensitive to pollution and pesticides and clearly found Mottura's clean, orgnanically-managed vineyards the perfect haven. Ever since, the creature has become the winery's mascot and is instantly recognisable on every Mottura wine label.

Mottura is widely believed to be one of Lazio's greatest wine producers and is especially successful with Grechetto (the grape used to make the famous Orvieto wine), for which he has funded many university studies aimed at characterizing and studying the variety. This helps explain why Mottura's wines are so different from those of neighbouring Umbria (the Mottura estate is located in Civitella d'Agliano, on the border between Lazio and Umbria). Via the combination of the unique terroir of north-eastern Lazio and unique clonal selections, Mottura's grechetto wines are richer, fleshier and deeper than most Orvieto made today. It could be easily argued in fact, that Sergio Mottura's Orvieto Tragugnano, made from grapes grown in Lazio, is actually better than most Orvieto made in their historic birthplace of Umbria.

Sergio was 21 when he came to the winery, and has never left. His family acquired the 400 hectare estate in 1933 and dedicated 38 hectares to vinegrowing in 1963 planting Trebbiano and Montepulciano. Grechetto was planted in 1968 after much research and experimentation, and the Mottura family quickly found that the best expression of their terroir came across in the Grechetto variety. The resistance of this grape to disease also lended itself to organic cultivation. Today, Sergio Mottura offers a range of wines unmatched in quality by any estate in Lazio. Besides the Tragugnano Orvieto, the Grechetto Poggio della Costa (mineral, unoaked) and the Latour a Civitella (oaked, richer, somewhat Chardonnay-like version) are not to be missed as they represent qualitative pinnacles of what the variety can achieve. Latour a Civitella was so named to honour the friendship between Sergio, and Fabrice Latour of Maison Louis Latour. Fabrice believed the wine to be one of the best structured whites in Italy, and mentored Sergio; suggesting different oak for the barrel fermentation and even lending Sergio his enologists to develop the wine. Latour a Civitella was the first white wine from Lazio to win the Tre Bicchieri award in 2004 and more recently, Sergio Mottura's efforts and competence have been such over the years that he was named of 'Winemaker of the year' in 2013 by the Gambero Rosso Guide.