A fragrant, fresh and elegant Portuguese red from the Dão region.

Sitting just south of the Port producing part of the country Dão is one of Portugal's classic red wine areas and one from where Dirk Niepoort makes some exemplary cuvées. Coming from very old vines - around 80 years old - it's made from several varieties, but Baga and Jaen (aka Mencia in Spain) predominate. It had a long maceration and fermentation, but without excessive extraction, and retains a pleasingly light colour. It was then aged for 20 months in large wooden barrels before being bottled unfiltered and unfined. It's wonderfully aromatic and mineral and has bags of forest fruit flavours overlayered with florality and spices. The tannins are super silky and and allow the fruit flavours to really show themselves off. It all leads to a long, layered and delicate finish.

With tons of flavour and character the only modest thing here is the alcohol level. Drink it alongside game, or poultry. 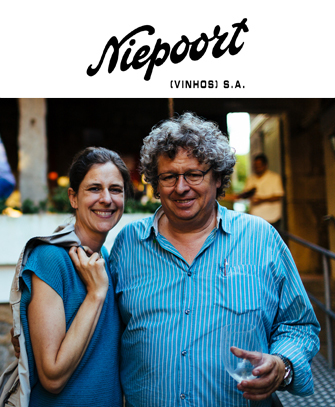 Founded in 1842, the small Port house of Niepoort is now run by 5th generation of the family by brother and sister Dirk and Verena Niepoort. They're one of the few small independent Port houses still in existence but are, nonetheless, a thriving concern. In addition to Port they also concentrate increasingly on the table wines of the Douro valley. It's easy to forget that it was only a few years ago that Niepoort was only sought out by a small band of faithful followers, as stock of remarkable, artisanal wines built up in the cramped old Niepoort lodge in Rua Serpa Pinto in Vila Nova de Gaia.

These days, with a formidable international reputation which spans all styles from aged tawny to vintage, and all points in between, demand threatens to outstrip supply. Ports are all made at the old Museu de Lagares in Vale de Mendiz, which has the only circular granite lagares in the Douro.

To say that Dirk Niepoort has revolutionised wine production in the Douro Valley would only risk understatement. Since his first experimental wine in 1990, and then first commercial production of Redoma Tinto a year later, Dirk has explored terroirs and experimented relentlessly. And with all winemaking (excepting Charme, and of course Port, both at Vale de Mendiz) conducted at the almost futuristic Quinta do Napoles, a plethora of different offerings are meticulously overseen by a dynamic and energetic team.