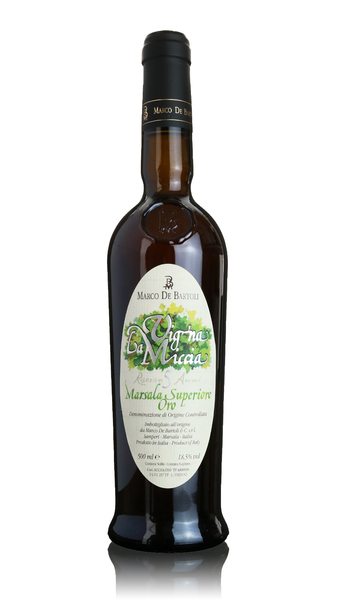 This is a quite distinctive an innovative style of semi-dry Marsala first created by Marco Bartoli back in 1985.

Classified as a premium 'Oro', or gold Marsala, it has a definite freshness as a result of using a cold vinification process. Best served no cooler than slightly chilled this is certainly not for use in cooking but is a perfect match for pate, soft cheeses or desserts.

Considered one of Sicily's winemaking pioneers for his long-standing commitment to the native Sicilian white grape varieties, Grillo and Zibibbo. He produces them on two separate estates: the first in Marsala, in Sicily's south-west corner, the other on the small island of Pantelleria, south-east of Sicily.

His belief in the value of traditional methods of production of these grapes and their wines is complemented by his equally strong belief in the future of Sicily as one of Europe's most vital viticultural areas. Grillo, which historically forms the basis of Marsala's classic wines, has been grown on the island since Phoenician times. From his Samperi winery, in the Contrada Samperi just west of Marsala, Marco De Bartoli produces several wines from this grape.

'Vecchio Samperi' was first made in 1980. Named for the territory that houses De Bartoli's country estate, it is a prestigious 'Vergine' wine made using the traditional solera method, in which small quantities of young wine are added to wines of older vintages as they pass through a sequence of wooden barrels. The complex, harmonious result celebrates the fruit of many harvests.

In 1982 De Bartoli created 'Vigna La Miccia', classified as an 'Oro' or gold Marsala, which is a sweeter, fresher dessert wine produced using a cold vinification process; it reveals an intense bouquet of Grillo and Inzolia grapes.

Another facet of Marco De Bartoli's work with Grillo led in 1983 to the 'Marsala Superiore', which is aged in oak barrels and fortified, as tradition would have it, with the 'mistella' alcohol derived from must of Inzolia and acqua vite.

In 1992 Marco De Bartoli added 'Grappoli del Grillo' to his collection: here Grillo is vinified as a dry white table wine, with its unmistakable character of Mediterranean spice. The only red wine produced at Samperi is 'Rosso di Marco', which came out for the first time in 1998 and is a Merlot based wine.