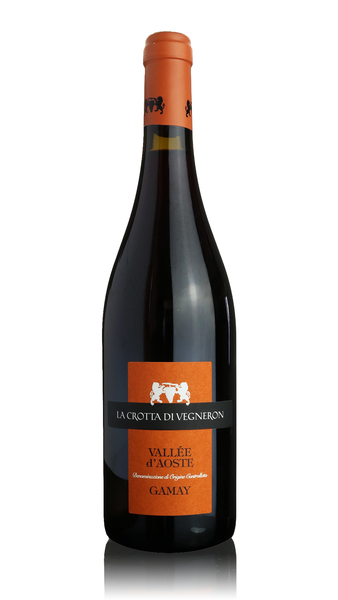 In a nutshell:
A delicate and expressive light red from North Western Italy near the Swiss/French border.

The lowdown:
Gamay is better known as the grape of Beaujolais, but here, in the Italian Alps, it's also able to thrive which is shown in this excellent wine which has something of a Swiss feel about the winemaking style. It has delicate yet persistent floral and fruity aromas of violet and strawberry. The refreshing lightness marries well with the elegant tannins and leads to a lovely fruity finish.

When to drink:
Good with salami and other cold meats, or hearty soups.

Situated in the Val d'Aosta in the far north west of Italy in the shadow of Mont Blanc, the Le Crotta di Vegneron cooperative was established in 1980 and today has a total of 70 members and produce a total of around 200,000 bottles annually.

Their vines are grown on southward facing, fragmented vineyards set on steep mountain slopes. 35% of the total production is red grapes and 65% white grapes. La Crotta di Vegneron's philosophy centres on the enhancement of autochthonous vines such as Petit Rouge, Fumin, and Vien de Nus, in addition to the traditional ones such as Muscat de Chambave and Nus Malvoisie. The company also produces international wines such as Pinot Noir, Gamay and Müller Thurgau.

La Crotta di Vegneron's vineyards are located at a fairly high altitude, ranging from 500 to 850m enjoying a special microclimate, with little rainfall, high average temperatures in the day and rather low temperatures in the summer nights. These morphological and climatic characteristics favour the ripening of the grapes and limit parasitic attacks, hence very few treatments are needed, and where necessary, the treatments made are used frugally and out of respect for the environment.