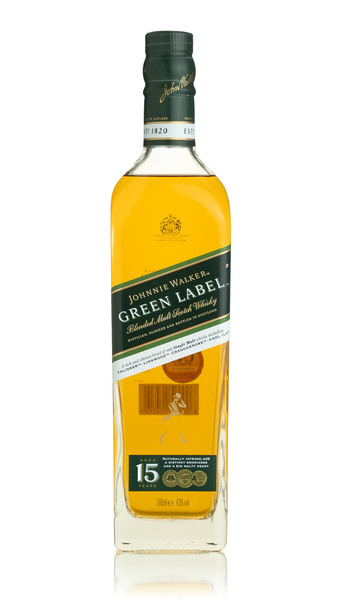 Green Label is back and is as good as ever. All the malts are at least 15yrs old with the primary ones being Talisker, Linkwood, Cragganmore and Caol Ila. Rich, full and malty with hints of peat smoke and a long and warming finish.

Whilst now it's probably the biggest Scotch Whisky brand in the world the roots of the label can be traced back to one John Walker who owned and ran a grocery business in Kilmarnock, Ayrshire. 1857 saw the introduction of Walker's Old Highland Blend which was the forerunner of their iconic Red and Black label blends created in 1909 and which were already in their trademark square profiled bottles. It was at this time that the famous 'striding man' figure, which has adorned their bottles ever since, made its debut.

It became a part of the Distillers Company in the 1920s and now is a key part of the drinks conglomerate Diageo's stable of brands. It became the world's best selling whisky as long ago as the 1950s and it has retained this pre-eminence ever since.