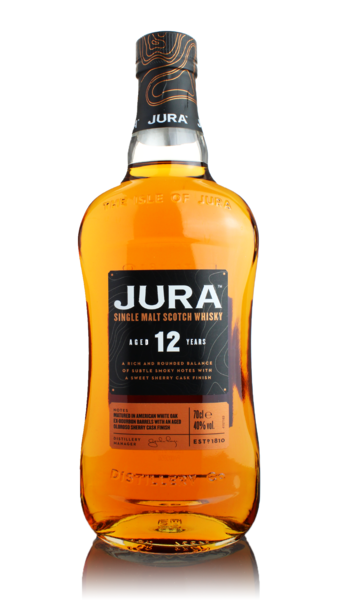 In a nutshell:
Nutty and rich Island Single Malt.

The lowdown:
Relaunched in 2018 is the 12 year old expression of their signature range of single malts. Matured in a combination of American ex bourbon casks and Old Oloroso Sherry casks this has nutty and soft spice aromas that follow into rich brown sugar and honeyed flavours with a slight savoury edge and very subtle smokiness.

The finish lingers pleasantly with rich dried fruit coming through.

The Isle of Jura Distillery, in the village of Craighouse in the island's only Scotch Whisky producer. Which is in contrast to the neighbouring island of Islay, one of the centres of the industry.

In fact, for most of the twentieth century there wasn't a distillery on Jura at all. It wasn't until 1963, after extensive rebuilding, that the original works, founded in 1810 re-opened.

Despite being close by Jura whiskies differ in nature quite a bit from their Islay counterparts. There's plenty of power there, but not the intense peat smoke character. It's currently under the ownership of Whyte & Mackay who are themselves a subsidiary of Emperador Distillers of the Philippines.