A delicately fragrant and fresh white from the Azores in the mid-Atlantic.

The name of this wine refers to Friar Pedro Gigante who was reputed to be the first to grow vines on these windswept islands back in the fifteenth century. It's a blend of all three of the main varieties found on Pico, Arinto dos Açores, Terrantez do Pico and Verdelho and is fermented in stainless steel before being aged on its lees for a short period. Combining the best bits of each grape, along with the influence of the island's amazing terroir it's bright and zippy, citrus and floral, with a great minerality, texture and fresh acidity. There's also a bracing touch of salinity at the finish.

Quite naturally a brilliant pairing with seafood and salads. 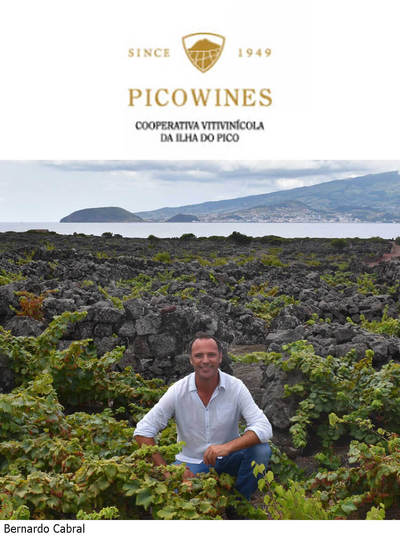 Pico wines, or the Cooperativa Vitivinicola da Ilha do Pico to give it its full name, is the cooperative on the largest island of the Azores. The soil, being basically black basalt, is pretty inhospitable to most types of crops and vines are one of the few that can get any purchase here. They also have to be protected from the harsh Atlantic winds and sea spray by an intricate network of volcanic rock walls known as currais which create a quite unique landscape and certainly not like many other vineyards you'll see.

In the early days of viticulture on the island sweet and fortified wines were the order of the day and while these are still very much a part of the island's production, in recent years table wines have become the norm rather than the exception.

Today Pico Wines has around 220 growers, from all parts of the island, whose grapes are vinified there and since 2017 the head winemaker has been Bernado Cabral. He brings with him many years experience from mainland Portugal. Among his objectives in raising the profile of wines from here is to emphasise the unique terroir which the volcanic soils and maritime climate of the islands provide.