A classic medium dry cider from Hawkes Cidery of Bermondsey.

Using a unique blend several varieties of both eating and cider apples which are pressed in London this brilliantly refreshing cider delivers a smooth and harmonius body with a rich texture on the palate all complemented by a crisp wine-like feel at the finish. 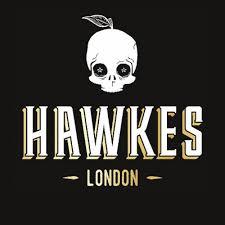 The inspiration for their name is taken from London's original street hawkers and it makes a statement about where they want to be seen in the world of cider. The way they go about things is certainly more in line with the capital's craft beer brewers than tradtional cider makers.

Founded in 2013 by Simon Wright who wanted to introduce drinkers to craft cider in a world where it's mostly dominated by big brands they've been steadily gaining attention. In 2018 they were acquired by Brewdog, the trailblazer of the craft beer scene and shortly afterwards moved their premises to what's often referred to as the 'Bermondsey Beer Mile' and now rub shoulders with a host of London's cutting edge craft beer breweries.