A full bodied, rich and highly regarded South African Chardonnay from one of the country's finest producers.

The location of their vineyards, at pretty much the southern tip of South Africa, is well suited for creating wines with Old-World restraint and finesse and this is certainly very much Burgundian in style. It's a wine with great length and complexity, with intense pear, peach and tropical fruits and a well integrated elegant creaminess from time spent ageing in oak. A refined core of bright citrus and crisp minerality runs right through to the elegant, textured finish.

There's real intensity and personality on display here. It's ready to drink now, but will improve over the next few years. Ideal with poultry, fish and seafood served with creamy sauces. 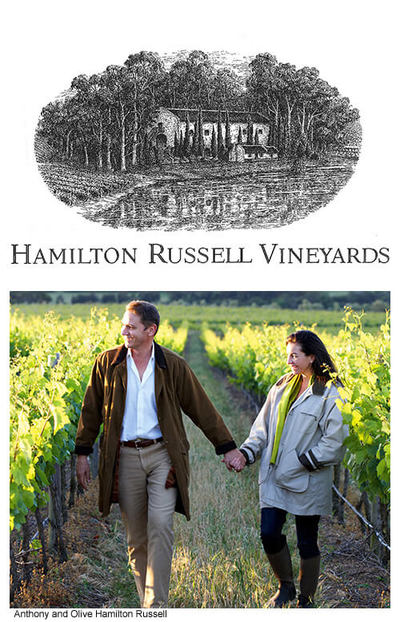 Rebels and pioneers, Hamilton Russell Vineyards were the first to grow vines in the cool, maritime region of the Hemel-en-Aarde Valley. Tim Hamilton Russell planted Pinot Noir and Chardonnay on previously uncultivated land in 1976, both rare varieties for South Africa at the time. The site he chose behind the old fishing village of Hermanus allows for unusually classically styled wines, which have garnered a reputation as some of the ?nest in South Africa and the New World. Its also right at the bottom tip of the country, the most southerly in the African continent.

1994 saw Anthony Hamilton Russell take ownership of the Estate, and extensive soil research was initiated which identified 52 hectares of stony, clay-rich, shale soils as optimal for the individual, expressive style of wine desired. Today, the Estate has 20 parcels of Chardonnay vines, all vinified separately, before blending for consistency of aesthetic, but with the character of the vintage also present. The Pinot Noir plots give Burgundian subtlety, texture and length, which is down to the identification of the shale/gravel soils on which the vines now grow.

Amongst the vines, biodynamic practices are beginning to prevail; nitrogen fixing lupins and earthworm tea are used to restore vital microbes to the soil, with biodiversity islands being used to bring beneficial plants to the area. In the winery, Anthony and winemaker Emul Ross seek to make wines which demand something from the drinker, as fine literature does from the reader.

Hemel-en-Aarde is Afrikaans for Heaven on Earth and given their spectacular location and the quality of the wines produced it's easy to see they have a point.