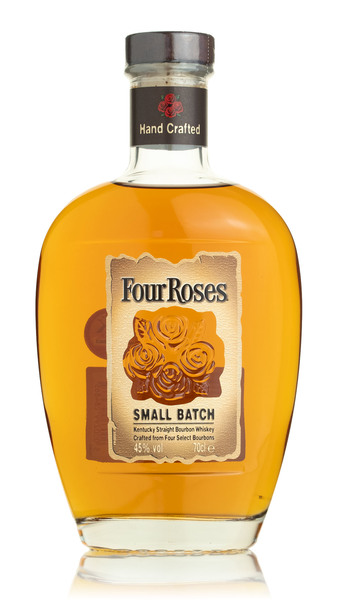 In a nutshell:
A sweet, spicy and well balanced Kentucky Bourbon Whiskey.

The lowdown:
Just four casks are used in each release of Small Batch Bourbon and each one is carefully selected before being carefully blended together in order to create just the right balance each time. It's full of rich, spicy, fruity aromas with a creamy and mellow palate of ripe red berries, spice and caramel before it finishes with soft, smooth and lengthy sign off.

The history of the Four Roses Distilllery goes back to the late 1800s, In 1888 Paul Jones Jr, the founder of the company, trademarked the name Four Roses and at that time the business was based in Louisville, Kentucky. Later, in 1922, they purchased the Frankfort Distilling Company, further expanding their operations. In 1943 the drinks conglomerate Seagrams purchased the Frankfort Distilling Co mainly to acquire the name 'Four Roses' by then one of the most recognized names in Bourbon. In 2002 Japan's Kirin Brewery Company purchased the brand and production facilities in Lawrenceburg, Kentucky and it's from here that their sought after bourbons are still made and distributed throughout the USA and wider world.