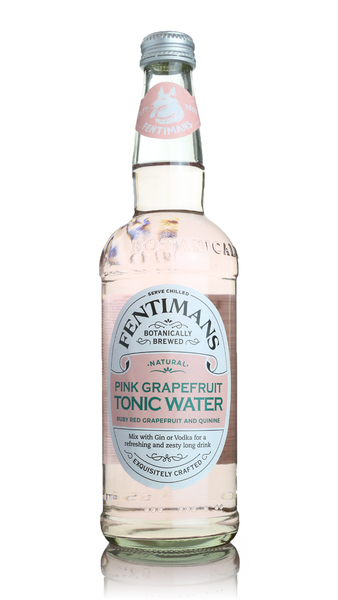 Out of Stock
Collection In-store & Local Delivery Only
Single Price: £2.80

Made with ruby red grapefruit and quinine for a tonic that is refreshingly dry and crisp. Mix with Gin or Vodka for a refreshing and zesty long drink. No artificial sweeteners, flavourings or preservatives.

In 1905, Thomas Fentiman, an iron puddler from Cleckheaton, England was approached by a fellow tradesman for a loan. A deal was struck and a recipe for botanically brewed ginger beer was provided as security. The loan was never repaid so Thomas became the owner of the unique recipe.

Thomas began using the recipe and producing botanically brewed ginger beer which he delivered door-to-door using a horse and cart for transport. His ginger beer was stored in handmade stone jars known affectionately as 'grey hens' which were stamped with an image of Thomas' pet dog 'Fearless' after winning the 'Crufts' obedience class in 1933 and 1934. Fentimans botanically brewed ginger beer quickly became very popular and the family business grew, with several brewing and production facilities being opened in the North of England.

Over 100 years since Fentimans started brewing botanical drinks the business is still in the Fentimans family and is owned by the Great Grandson of Thomas Fentiman. They also continue to make their delicious natural beverages by the multi-stage botanical brewing technique. Their processes have been updated and their beverages are now carbonated before being filled and pasteurised to extend the product shelf life. The one thing that has not changed is the superior quality and unsurpassed taste of their drinks.