A rich and fragrant Spanish red blend made by a Scotsman in hot and arid Aragon.

The name of this wine, El Risco, which means 'the crag' is a reference to the rugged Aragonese terrain in the high altitude vineyards of Calatayud where the old bush vines that go into this wine grow. A blend of Syrah, with a dash of Garnacha and Bobal the winemaking here was very simple. A small proportion of whole bunches underwent a seven day maceration and subsequently the wine was aged for a few months in tank before being bottled without any fining and a light filtration. The result is a sweet-scented fresh and lively wine with a wonderfully fruity character.

An easy drinking, versatile red that's good with things like pasta, paella and casseroles, or just by itself. 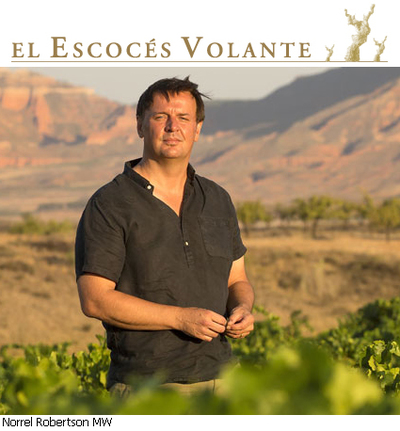 El Escocés Volante, meaning 'The Flying Scotsman', is owned by, naturally enough, Scotsman Norrel Robertson MW who is one of the few Masters of Wine living and working in Spain. After graduating with an MA in Politics and International Relations from Aberdeen University he decided on a change and to pursue a career in winemaking and spent several years studying and working around the world before arriiving in Spain in 2003. It was here, in the Calatayud area of Aragon, that his business, El Escocés Volante, was born.

He currently has around 20 hectares of his own vines in this area from which he makes award winning wines and in addition he has other projects further afield in Murcia, Andalucia and Galicia. He also consults for several Spainsh wineries together with import businesses in the UK and USA.