A mature and sublime Grand Cru Classé Saint-Émilion from an excellent vintage.

In contrast to many other top châteaux Grand Corbin-Despagne is owned by the family who founded the estate - the Despagnes - back in 1812. François Despagne, the current custodian, is a pillar of Saint-Émilion and an outstanding winemaker as well. 2005 has gone down as one of the best vintages of this century so far producing many big, bold and juicy wines. With the high levels of ripeness achieved this wine is dark in hue, massively complex, powerful and rich with rich black and red berry fruit flavours featuring throughout. The good levels of acidity have retained the freshness and helped everything stay in great balance while the weighty tannins have given good ageing potential.

A great chance to drink a fully mature right bank claret from a superlative vintage. 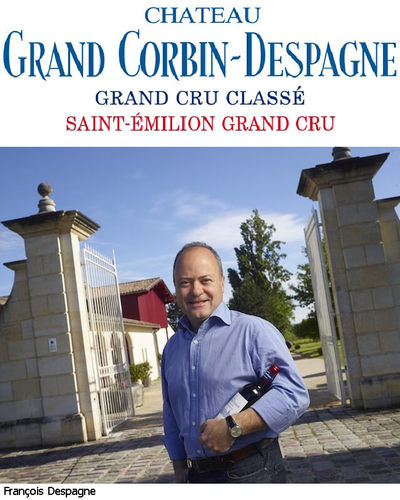 Still a family owned Château, the Despagnes have lived in and around St-Emilion since the early 17th century and they bought their first vineyards in this area in the early 19th century thus establing the estate. The current, and seventh generation, owner is François Despagne who describe himself as a modern tradionalist. He's keen to emphasise the importance of terroir while keeping fully abreast of up-to-date solutions which will enhance quality.

The estate extends to 30 hectares of vineyards which are at the northern end of St-Emilion bordering the Pomerol appellation and around three-quarters of the planting are of merlot with about 20% Cabernet Franc and a small amount of Cabernet Sauvignon. Since the mid 1990s they've followed sustainable farming principles and in 2010 converted to fully organic farming, achieving certification in 2013.

As a rsult of their approach the wines they produce are beautfully lush and concentrated and, happily, they are one of the châteaux that still offer excellent value for money.