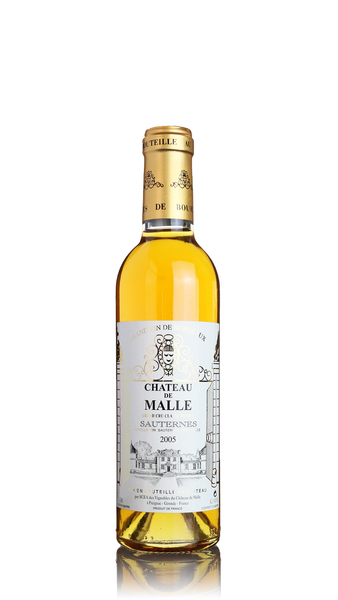 A classic Sauternes, from an estate renowned for wines that age really well. Harvesting involves several trips thorugh the vineyard to pick only those grapes at optimum ripeness. The rich peachy and honeyed notes are well balanced by hints of soft spice and almond flavours. With an understated acidity it signs off with a pleasingly clean finish.

The family of the Counts of Bournazel has been present in the Bordeaux region since the beginning of the 17th century, when Jacques de Malle, their direct ancestor, had the Chateau de Malle built.

They are enamelled with illustrious figures such as Jacques de Malle, President of the Parliament of Bordeaux; or Pierre de Malle, advisor to Louis XIV, Keeper of the Seals of the Court of Guyenne and parliamentarian in Bordeaux; or Henri de Bournazel known as the "Red Cavalier", a hero of the war of pacification of Morocco.

The history of this family is closely linked to that of Chateau de Malle.

In this charming property, rigorous know-how, the passion for the viticulture of beauty and goodness are passed down from generation to generation.

After the death of the Count of Bournazel in 1985, it was his wife the Countess of Bournazel who elegantly took over the estate, assisted a few years later by her children: Paul-Henry, Antoine and Charles, thus perpetuating the family tradition. Paul-Henry moved to Malle with his family in 1966 and gradually took over the management of the operation.