This is their Grand Vin and is made from old vines lying in the heart of their vineyards. It comprises two thirds Cabernet Sauvignon to one third Merlot and was matured in 50% new oak barriques for around 18 months prior to bottling. On the nose there are ripe black fruits alongside a bright florality while on the palate plums, cassis, herbs, cloves and leather can all be detected. It has a polished and silky structure which allow all its attributes to shine through really well.

Altogether a quite gorgeous wine that's drinking very well now and will be on top form through to the mid/late 2020s. 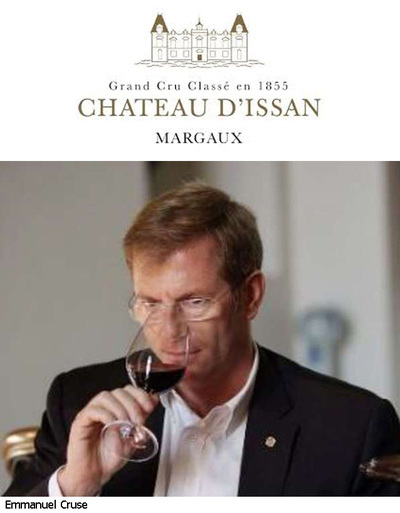 The 3ème Cru Classé estate of Château d'Issan sits in the Margaux appellation neighbouring other famous names such as Palmer and Château Margaux itself. The estate has a history going back to the 12th Century, rumour has it their wines were served at the wedding of Eleanor of Aquitane to King Henry II of England, and the ancient buildings themselves, surrounded by a moat, are what most people imagine as a classic French Château.

Coming into the modern era the estate was purchased in 1945 by the Cruse family who were already successful negociants and winemakers. At that time the estate wasn't in the best shape, but in the intervening time things steadily improved until 1998 when, with the arrival of Emmanuel Cruse at the helm, there was a step change in the operation. In te past two decades quality has improved vastly and they are now considered one of the top châteaux in Margaux. In 2013 the Lorenzetti family, owners of Châteaux Pédesclaux and Ladouys, in neighbouring Pauillac and St Estephe respectively, acquired a 50% interest alongside the Cruse family.

In total the estate has 44 hectares of vines split between Cabernet Sauvignon and Merlot in a roughly 60/40 proportion. In addition to their Grand Vin since 1995 they've made a second wine, Blason d'Issan, as well as two other wines, Haut-Médoc d'Issan and Moulin d'Issan, made from fruit grown outside of Margaux.