An exceptional sweet wine from one of the true legends in Rutherglen, Victoria.

Originally called 'Tokay' due to a falsely believed lineage from Hungarian Tokaji, the grape in Victoria was later revealed as Muscadelle from Bordeaux - so in 2007 Australian producers renamed the style 'Topaque'. But the essence remains the same, for this style and the sweet Muscats - both of which have been called the 'world's richest wines'. Over-ripe or 'raisined' grapes are gently harvested and made into fortified sweet wine, put into barrels and blended in a solera system with equally sweet, fortified wines of previous vintages. Offering lavish richness, complexity, and roundness from pre-aging before release, this Topaque is hugely satisfying and exceptional value at this very modest price.

Perfect with toffee, dried fruit and nutty desserts or just on its own. 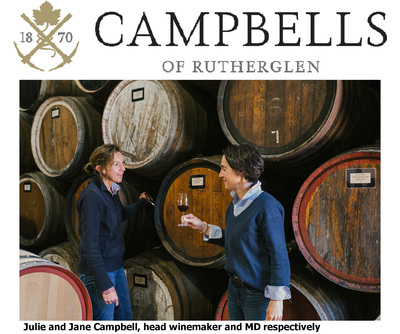 The Campbell family have been winemakers in Rutherglen , North East Victoria, Australia since 1870. Over 140 years of tradition, passion and experience all combine to capture the full flavours of Rutherglen.

Their wines spring from the unique qualities of the Rutherglen Wine Region, five generations of knowledge and a dedication to innovation. They have a hands on approach and an uncompromising commitment to quality.