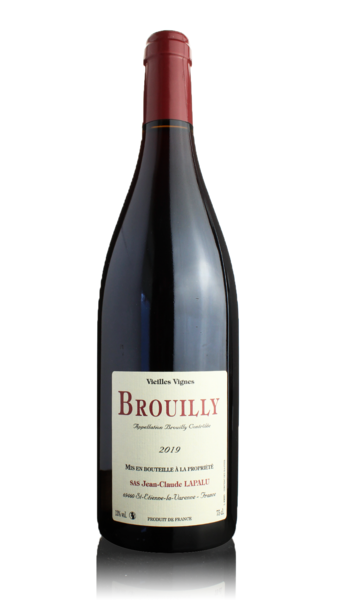 In a nutshell:
An exemplary Beaujolais Cru from a respected organic producer.

The lowdown:
Don't look for bubblegum, candy or sweet juicy fruit from this Brouilly, as it probably tastes like no Beaujolais you've ever come across before. However, if you like interesting, complex, supple, subtle and characterful wines with great depth and personality, look no further. This is about as serious as Gamay gets and certainly as good.

When to drink:
Buy one for drinking now and another for the cellar, this is a style of Beaujolais that really benefits from a bit of bottle age.

From the outset Jean-Claude Lapalu followed in the family tradition farming the same vines of his father and grandfather which were then sold to the local cooperative. However in 1995 Jean-Claude's desire to head off in a different direction and put his own stamp on things resulted in the decision to start making and bottling under his own label.

His vineyards, in the southernmost of the Beaujolais Crus, extend to around 10 hectares and are set around the rolling hills of Mont Brouilly with most having a favourable easterly, or south easterly aspect. His winery is nearby in his home village of Saint-Étienne-la-Varenne is known as the 'gateway to the Crus'. From 2010 the domaine has been organically certified and, in addition, biodynamic principals are followed extensively throughout.

He's always been at the forefront of naturally-farmed and naturally produced wine in Beaujolais and having honed his art over the years is, these days, one of the most highly respected producers in the region. Experimentation and his natural curiosity have always driven his winemaking and he's always been prepared to try things out. However, through a process of evolution, the quality of his wines have reached a consistently high level and his selection of cuvées are always in high demand. The overarching character of his wines are their elegance, supplenesss and above all their deliciousness.