In a nutshell:
An intense and fruity Speyside single malt with a touch of peat smoke from Benromach of Forres.

The lowdown:
One of Benromachs's defining characteristics is the hint of peaty smoke in most of their whiskies which is relatively unusual for Speyside malts. This is matured in a selection of bourbon and sherry casks which give delightful vanilla, ginger and menthol notes. The extended maturation has softened its smokiness somewhat while developing wood imbued succulent honey, dried fruits and a zesty orange notes. At the finish the rich fruit cake quality really stands out adding extra complexity.

A big flavoured single malt with everything working in harmony. 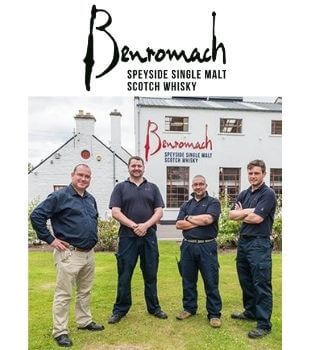 Based in the Speyside town of Forres Benromach first started distilling in 1900. In its early years it passed through a number of owners until, ultimately, ending up as part of the Distillers Company (now part of Diageo). Due to a world wide surplus of Scotch in the early 1980's the distillery was mothballed and, during the closure, raided for parts by the owners for use in their other facilities.

1993 saw the start of Benromach's current incarnation when the shell of the distillery was bought by Gordon and Macphail, the highly respected independent bottlers, who set about renovating the buildings, plant and equipment in order to give it a new lease of life. The first spirits were distilled about five years after completion of the works.

One of Gordon & Macphail's objectives was to see a return to an older style of Speyside malt, more medium bodied and fruity and which displayed a touch of peaty smoke. In the years since their re-opening they've released a steadily growing range of expressions all of which emphasise differing characteristics while remaining faithful to their stated aim to bing back a unique style of Speyside whisky that had almost been lost forever.