The lowdown:
Taking its name from the infamous whirlpool found not far from Islay this dram is not for the faint hearted. Non-chill filtered at 57.1% ABV there are torrents of deep, peaty and peppery taste lurking beneath the surface. The finish is long and powerful with rich notes of dark coffee and dark chocolate. It's an acclaimed expression from Ardbeg and certainly one to savour. 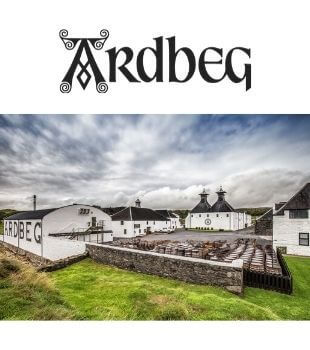 For over 200 years, Ardbeg has been made on the small, remote Scottish Isle of Islay. Some people travel to Ardbeg along the winding road from Port Ellen. Others follow their nose, their destiny or the advice of a good friend.

1815 - Ardbeg Distillery is founded. John Macdougall takes out a licence, establishing Ardbeg Distillery as a legitimate commercial concern.
1838  A new owner. Thomas Buchanan, a Glasgow spirit merchant, buys the Distillery for £1,800. John Macdougalls son Alexander continues to manage operations.
1853  Alexander Macdougall Dies. After his death, Ardbeg is co-run by Colin Hay and Macdougalls sisters, Margaret and Flora, who may rightfully be Scotlands first female distillers.
1887  Output tops 1.1 million litres a year. In his book The Whisky Distilleries of the United Kingdom, Alfred Barnard records that Ardbeg is producing 250,000 gallons (1.1 million litres) of whisky a year, making it the most productive distillery on Islay.
1911  The name 'Ardbeg' is registered as a trademark. The distinctive letter A is also registered to protect Ardbegs brand and reputation.
1922  Alexander Macdougall & Co Ltd buys Ardbeg for £19,000. 1977  Hiram Walker acquires Ardbeg.
1981  Production dwindles to nothing. The distillery closes with the loss of 18 jobs and a devastating effect on the local community.
1987  Allied Lyons acquires Hirna Walker and therefore Ardbeg. Two years later, small-scale distilling resumes to satisfy demand for Ardbeg from blenders.
1997  The Glenmorangie company purchases the distillery. After the second closure in 1991, the Distillery reopens in 1997. Full-time production commences, with the first bottlings comprising 17 Years Old, 1978 Vintage and Ardbeg Provenance.
1998  Ardbeg are voted distillery of the year. The Visitor Centre and Old Kiln Cafe open, attracting 3,500 visitors. Its a remarkable turnaround in only 12 short months. PLUS Ardbeg 1975 launches.

Skipping forward to 2015 and Instead of looking backwards for Ardbegs bicentenary, they looked 200 years into the future. Ardbeg Perpetuum launched, as did Dr Bills White Paper on the results of our space experiment