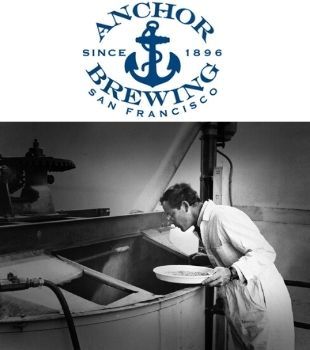 While undoubtedly regarded highly among the ranks of craft breweries San Fransisco's Anchor Brewing can, in fact, trace its roots all the way back to the California Gold Rush of 1849. And in doing so it pre-dates the modern concept of craft brewing by considerably more than a century.

It's fair to say that between the mid-nineteenth century and the 1960s their development followed something of a windy road. They survived, not without difficulty, fires, the sudden deaths of owners, prohibition and the rise of mass market breweries among other challenging events and somehow maanaged to make it through to the dawn of the current era of craft brewing. In fact it's fair to say they were instrumental in instigating the revival of the San Francisco microbrewery industry in the seventies.

As a reaction against mainstream, bulk produced beer, these microbreweries turned to full-flavoured, hand-produced historic brews as an alternative. Despite their huge international success, Anchor remain true to their origins and have resisted expansion. And they're still based in central San Franciso in the Potrero Hill district. While the brewery's most famous beer, Anchor Steam, an all-malt, spicy, amber brew is still a mainstay of their range the number of beers, specials, seasonals, limited editions as well as the core range continues to grow and develop and it's fair to say that despite their venerable age for a craft brewery they remain at the cutting edge of things still.