A simply terrific South American Viognier. Its big, broad and weighty with a steely flintiness that makes for a fresh mouthfeel and at this price a wine of amazing value. Casa Montes are undoubtedly one of the stars of San Juan in western Argentina. 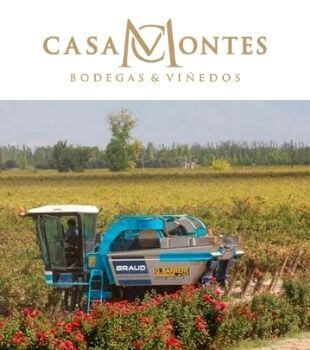 Don Francisco Montes, an Andalusian immigrant, after decades of the successful business tradition, founded Casa Montes Bodegas & Viñedos in the province of San Juan in 1992; highlighting the pioneering trait of the family. In the Tulúm Valley, on the banks of the San Juan River, 700 meters above sea level, at 31º South Latitude, with an average annual temperature of 17º C, annual rainfall below 200 mm and alluvial soils, it is the industrial, agricultural project of Bodegas y Viñedos Casa Montes.

With a privileged location, this oasis located between the high mountain peaks of the province of San Juan has an agricultural level of 160 hectares of vineyards. Conducted entirely under the trellis system, and irrigated with the melting water of the Andes mountain range, which is dammed for distribution by the pressurized irrigation system, in its reservoir of 35 million litres of water, strategically framed by the protected reserve of its natural carob tree forest.

Casa Montes achieves, in this area of ??ideal conditions, the healthy and just maturation of its various varietal grapes, among which the Viognier and Chardonnay stand out in whites, and reds such as Malbec, Cabernet Sauvignon, Petit Verdot, Tannat, Cabernet Franc, Syrah, Tannat, among others.

Complementing its agricultural strength, Bodegas y Viñedos Casa Montes, has a winery at the forefront of technology, with a capacity of over 3,000,000 litres in stainless steel tanks and a fully automated temperature control and pumping system that allow the control of all the production processes of its important diversity of wine lines.